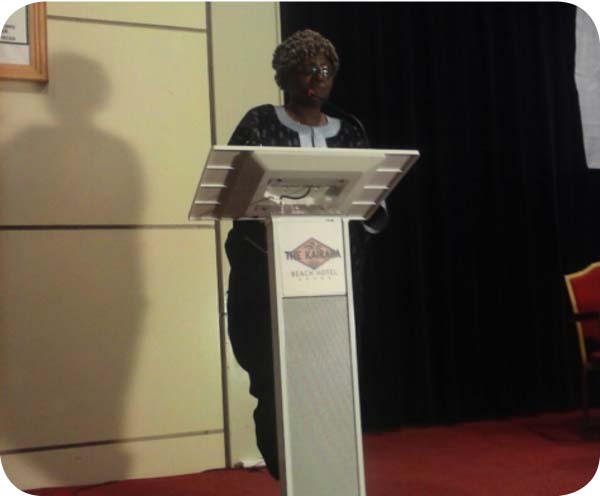 Listening to the voice of a defender of human and women’s rights, a fighter and a woman that hardly accepts defeat, one could not have celebrated World Press Freedom Day better than having Aunty Amie in your midst wearing her gender lens.

This woman was imprisoned while breast-feeding, but even at that material time defeat was not the language Aunty Amie spoke, rather she said the struggle continues.

As the Gambian media fraternity joined the rest of the world in celebrating World Press Freedom Day on 3 May 2015, held in grand style at the Kairaba Beach Hotel and organized by the Gambia Press Union and partners, veteran women journalists like Aunty Amie Sillah were in attendance; and she left with the female journalists words of wisdom, courage and the determination to continue the struggle, saying “prison should not be our worry” in the execution of our duties as journalists.

Write both sides of the story and engage experts; and stop giving their opinions in the news, which should be left to the public, she advised.

“The media is duty-bound to report the facts as they are, so that the public will be properly informed. The media should interrogate society and unearth what is rotten. As the Fourth Estate, it must be given the responsibility to hold the government and public officials accountable, and serve the public interest,” she said.

Amie Sillah said in The Gambia and in the world, we have to really look at women to see how they fare with men in partnership to develop their society.

She said the topic mainstreaming women and girls in news toward Gender Equality in National News Reporting are very interesting.

Public exposure is, therefore, a major deterrent to the violation of rights; that is why they could not allow free speech to be killed.

The media enhances freedom of expression by amplifying the silent voices of victims, and they see that in most occasions women are double victims.

Women are victimized by the system, and also in the homes they suffer gender-based violence; so that must be brought up.

Amie Sillah said women are actors in national development, and victims of violence and violation of freedom and rights.

The media also has a duty to cover the activity of women actors and victims, and amplify their voices.

Amie Sillah said the problem in The Gambia of mainstreaming women and girls in the news is selective coverage. According to section 208 of the constitution, the state should give divergent views and dissenting opinions, and censorship at that level has made it impossible for women with divergent views and dissenting opinions to have coverage in the only Radio Gambia and TV.

She said that was why newspapers try to amplify such voices, but few women could read and write.

They all accept that the professionalism marked by the publication of truth in good faith in the public interest is indispensable, adding that without an environment conducive to free expression of views and opinions the whole truth would not be known.

Censorship in the state media affects both male and female, and many young women are now entering the profession, which is a good thing; but many are discouraged by family and friends, as many journalists and media workers are seen as endangered species.

Journalism and media work is a call and a noble profession, and both women and girls and men and boys, have to go into it with passion, dignity and purpose.

They should not allow themselves to be used as sitting journalists or what they called “gutter” journalists, because that was going to infringed on their dignity.

“Let us inform and try to get both sides of the story, to give a balanced story to the public without being prejudicial or with an agenda,” she said.

On the conditions of women, she said, women should be featured in news so that they could impact on policy and practice, development of freedom of women in particular and the whole society in general.

As professional women and men, journalists and media workers should capture the solidarity of women without any parochial explanation with a good practice to be emulated and promoted, she said.

On rural women, she said, they have seen their problems, they are numerous and they should try to show their efforts and constraints, which include the need for agricultural inputs such as fertilizers, adequate water and pesticides.

She said as professionals they should bring it out to the fore, so that the authorities get to know about it so as to improve policy.

The urban women are also engaged in economic activities for women empowerment and such activities, which should be captured in the news for authorities to note their financial constraints and marketing of products, could be highlighted for redress, she further stated.

The women with disabilities should not be forgotten, because they are triply suppressed by the system, by gender and also disability that was why the media has to capture them and see what they could do.

Also in their stories, they should show the issue of inequalities between men and women, boys and girls such as in career development.

Women have problems in career development, and sometimes some institutions are not honouring the six months maternity leave.

As journalists and media workers, they needed to come out with stories that challenge the gender stereotypes to lead our people to live positive lives.

Who said women could not be pilots, mechanics, successful business persons, engineers?

What about a story showing a woman mechanic working in her workshop under a car with her working overalls and a cap; these are the stories they should be showing as journalists.

A courageous gender-sensitive, father nannying a baby, feeding him/her while his wife relaxes after a heavy day’s work are very good stories journalists could come up with.

She said they have to fight gender stereotype in the media.

“We should go out in the communities and search for stories to help men and women, boys and girls live their lives in realities,” she said.

How the rural woman lives is different from the urban woman, so they should really capture the difference types of living of these women.

The media should be profiling female candidates and stop judging them, because what happens when the female candidates come out people would be judging and the media would be there, and they have seen it in the Gambian media and in advanced countries.

The number of children that particular woman have out of wedlock; and when it was men they never do that and, in The Gambia, they have seen lots of men who were good politicians, but were never married; what is good for the goose should be good for the gander, she added.