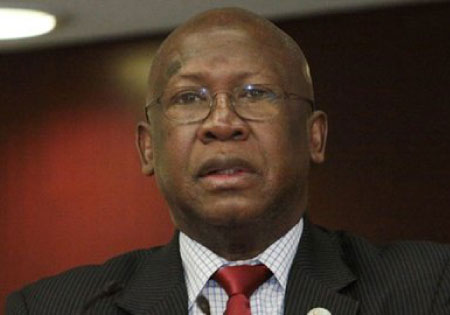 The staff and management of the United Nations Economic Commission for Africa (ECA) await their new Under Secretary-General and Executive Secretary following the retirement of Gambian-born Abdoulie Janneh at the end of August 2012, after seven years at ECA.

Mr. Janneh bowed to a rousing standing ovation last Thursday 29 August 2012, in a heavily attended staff town hall meeting. The day after, 30 August, a lively seminar took place on his thoughts and writings in two areas that, he often admitted, consumed most of his energies throughout his term at the ECA - regional integration, partnerships and sustainable development. The seminar was attended by ECA member states, senior managers from the African Union Commission, and UN staff based in Ethiopia.

The high point of the seminar was the launch of two publications: “Integrating Africa” and “Reflections on Africa’s Development”.

Integrating Africa is a 323-page collection of some of Janneh’s policy statements over the last seven years, centering on the Africa Policy Agenda; Regional Integration, Partnerships; the Financial Crisis and Africa’s Special Needs.

The book was launched by Advocate Bience Gawanas, Commissioner for Social Affairs of the African Union, who spoke of Janneh’s commitment to partnership, his revival of a joint ECA/African Union/AfDB Secretariat and transforming the Regional Coordination Mechanism (RCM) from a mere consultative forum into a coordination mechanism co-chaired by the Deputy Secretary-General of the United Nations and the Deputy Chairperson of the African Union Commission.

Gawanas said there was no better way to launch Integrating Africa than to cite the words of the late Prime Minister of Ethiopia, Meles Zenawi, on the book.

She quoted Mr. Zenawi as saying “The policy statements in this book contributed to shaping our strategies, policies and programmes in the pursuit of sustainable development and economic transformation.”

In a farewell message to staff today, Janneh said:  “Together, we have built a more focused, relevant, professional and better resourced UNECA. Our success was mainly due to our collective dedication and hard work, but obviously with other contributory factors.”

“Amongst the many credible decisions of the last AU/ECA Ministerial Conference was the establishment of the high-level panel on Illicit Financial Flows from Africa that is now being chaired by former President Thabo Mbeki,” he said.

Janneh also spoke of structures and programmes notably the AU/AfDB/ECA Joint Secretariat Support Office, the ClimDev Africa Programme, the Land Policy Initiative and the Coalition for Dialogue on Africa (CoDA) which were initiated under him.

Dr. Lopes has actively contributed to research on development issues. Specialized in development and strategic planning, he has authored or edited 22 books and taught at universities and academic institutions in Lisbon, Coimbra, Zurich, Uppsala, Mexico, São Paulo and Rio de Janeiro.