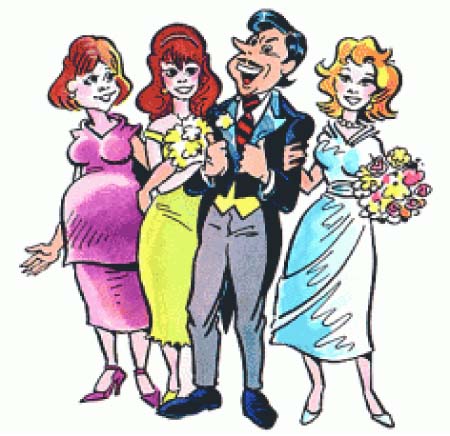 The polygamous system in our societal settings has been one that is always greeted with violence from co-wives, and sometimes their children.

It has been in existence for many years.

Men who marry two or more wives and shelter them in the same compound, sometimes find it very hard to maintain peace between them, as the co-wives see each other as rivals and competitors, competing to gain full control of their man who is seen as a precious trophy that has to be won, at any cost.

In acquiring the man’s favour, some women will resort to violence while others choose cooking delicious meals and others seek spiritual help to keep the man tied to their wrapper.

Those who resort to violence may involve their children during the course of the violence, and this was what happened in the case of Mariam who told me that when she was a child, her step-mother who was much younger than her mother at that time, used to beat up her mother like a child.

“My childhood was not normal at all. While other children were busy playing and laughing, I was sitting at home watching a young woman beating up my mother, from the moment we wake up in the morning until we go to bed.

This woman beats up my mother like someone beating up her child. My father was not around, and we were the only ones at home.

She controlled everything, including the living room and I and my mother were restricted to a single room; and we are not allowed to sit in the living room or watch the TV that was bought by my father.

Sometimes, I just keep on wondering why she was doing it. Did my mother offend her every day, and did my father tell her to beat up my mother?

So, when I grew up into a lady, I thought that she will stop what she has been doing, because I have grown up, but she was used to it, and she enjoyed it.

One day, as I closed from school and approached my house, I saw people standing at our gate. I rushed in and saw this woman holding a stick, while my mother was in her bedroom and closed the door.

I threw my bag down, removed my earrings, got down from my high heels and closed our compound gate. I beat up this woman to my satisfaction; I tore her clothes, and left her naked with a disfigured face.

She then ran to the police station, and when the police came I told them that “this woman took away the joy of childhood from me by beating up my mother every day; so from this day onwards I will make her life a living hell; not for revenge, but I want her to know how it feels to be beaten by someone who is more powerful than you are.”

She was much younger, that was why she had the power to beat up my mother; well, now the tables have turned, and it is my turn to beat her up.”

What a story from Mariam, and people always say that a child never forgets about anything that is done to him or her, and that was the case with Mariam.

Polygamy is a religious obligation, and if a man can afford to feed, shelter, and be fair and just between the wives then he qualified; but in this 21st century, men sometimes lose control of things, which leads to co-wives being rivals instead of friends.

Woman to woman violence should be something that women should desist from. A man who paid your bride price and paid someone else’s bride price, and brings the two of you together as one big family, irrespective of the different homes and backgrounds that you came from, has nothing more than a good intention for you both, and the least you could do is to see each other as sisters and friends.

There are co-wives who fight every day, not because they hate each other or they are fighting to gain control of the man, but because each of them have friends in the neighbourhood that will tell them things to turn them against each other.

The societies in which we live also contribute negatively in the animosity between co-wives.

Husbands also play a role in this, because if the first wife cooks a delicious meal containing cow meat, and while you are eating you are saying negative things about the second wife; this will make the first wife show off in front of the second wife that their husband loves only her, and that will lead to violence which will not be good for the children.

If a child grows up seeing her mother quarrelling and fighting all the time, she may think it is a normal thing.

In my neighbourhood, there live a man whose wives are always quarrelling and they are the first to wake up everyone; and it so happens that the second wife is the trouble-maker, and the more powerful.

So, one day, when they started quarrelling, the second wife lifted up the first wife and went up to the well in the compound and said she will throw her in the well; then people started shouting.

After that, the man decided to rent an apartment for the second wife to separate them, so that he can have peace of mind, and it worked.

We have seen co-wives assaulting each other very badly, and neighbours see it as a normal fight between co-wives which needs no legal attention until when the worst happens.

We have also seen and heard co-wives turning each other into inhuman creatures. While others with the help of a marabout invoke mysterious sicknesses on each other, all in the name of being rivals.

Being rivals as co-wives is expensive, but living in peace as sisters costs nothing!

Let men try their best to maintain peace at any cost between their wives, and let women embrace each other and accept each other as sisters; for the sake of their children and for their man to live longer. Let society not treat violence as a private family matter, but a matter of public interest that needs a remedy.