16. Selection (takhayyur or takhyir): Takhayyur means selection and preference of one among the available rulings or opinions of a single madhhad, or of the different madhhabs on a broader scale, for the purpose of legislation and enforcement. This is a simple question of choosing a particular ruling or formula without any attempt to change or reform it. Although takhayyur, like preference (al-tarjih), does not necessarily contemplate enforcement and can be employed in theoretical debates and selection of views, the Ottoman authorities utilized it in the codification of the Mejelle (1876) and other laws. Subsequently, it has been widely employed as a means of flexibility and choice among the rulings of the existing madhhabs. Twentieth century family law reforms often consisted of legislation by Hanafi countries that selected some of the rulings of the Maliki School on divorce, and legislation in the Maliki countries that selected provisions of the Hanafi law on the requirements of a valid marriage contract, as I shall presently elaborate.

The Ottoman Law of Family Rights 1917 widened the scope of takhayyur by including the rulings of other recognized Sunni law school. The scope of takhayyur was further widened by the selection of the views of individual jurists, outside the existing madhhabs, if the view so chosen offered the most appropriate of all the available views for purpose of legislation and enforcement. We will illustrate some of the main trends of takhayyur and how it has been used as a means of flexibility and reform in Islamic matrimonial law: whereas the Hanafi law provisions concerning divorce are generally restrictive and do not recognize judicial divorce, its provisions on the marriage contract are most liberal. Hanafi marriage law authorizes an adult to conclude his or her own marriage contract without the intervention of a legal guardian. Maliki divorce law recognizes judicial separation and divorce that may follow a failed attempt at arbitration in martial conflicts. The arbitration procedure in family disputes is better defined in the Maliki School that in the other law schools. The differing positions of the Hanafi and Maliki Schools made elsewhere to select Hanafi positions on marriage and Maliki positions on divorce.

To illustrate the application of takhayyur outside the scope of the existing madhhabs, we may refer to the adoption, in the Ottoman Law of Family Rights, of the views of Mu’tazili scholars, Ibn Shubrumah, Abu Bakr al-Asamm and Uthman al-Batti on the subject of guardianship in marriage. Contrary to the mainstream juristic opinion of the existing madhhabs, these scholars held that there is no justification for guardianship in marriage of a minor person, on the ground that there is on need for such a union. This argument was used by modern reformers to abolish child marriage through the enactment of a statutory marriage age. In this case, the selection was made by the law makers in response to the need for curbing child marriage, which had come to be regarded as a source of mischief that imposes unnecessary restrictions on children’s freedom of contract by binding them to an arranged marriage that they cannot reverse even when they become adults. Legislation in Egypt, Syria, Sudan, Morocco, Tunisia, Iraq and other countries followed suit and effectively outlawed child marriage by utilizing the expedient of takhayyur.

As noted earlier, statutory legislation that is not in conflict with any of the specific laws of Islam and are in harmony with the overriding goals of maslahah and justice may be included in the range of takhayyur and selected on the ground of merit and suitability to the needs of society. This means that the prevailing statutory law of a Muslim country might be accorded the status of a madhhab, or at least of the opinion of an individual jurist, for purposes of selection and takhayyur. To accord this degree of recognition to statutory law is not unjustified. After all, statutory legislation enacted in accordance with normal procedures undergoes the scrutiny of informed individuals and the approval of a consultative assembly or parliament.

17. Talfiq, literally to patch up or piece together, is an extension of takhayyur to the extent that the patching applies to a preferred option. Whereas takhayyur signifies the selection of a juristic view or opinion as originally formulated without trying to change it, talfiq often combines a part of the doctrine of one school or jurist with part of the doctrine of another school or jurist, and, in this way, arrives at a ruling that is deemed to be most suitable. Talfiq has been applied in the modern legislation of many Muslim countries, e.g., the law of inheritance and judicial circulars particularly of 1939 and 1943 of Sudan, the Egyptian Waqf Law 1947, the Syrian Law of Personal Status 1953, and the Tunisian Law of Personal Status 1956.

Talfiq and takhayyur may fall within the ambit of taqlid when the search for necessary formulas and solutions to issue is confined to the existing literature of the schools and jurists of the past, without involving literature a direct recourse to independent reasoning and ijtihad. This is also true of harmonization, which is concerned mainly with the existing of doctrine, opinion or legislation. However, because harmonization is not confined to these two methods and may comprise ijtihad and fatwa, it is wider in scope and leaves room for fresh interpretation and ijtihad.

18. Shariah-Oriented Policy (Siyasah Shariyyur): As doctrine of public law, siyasah shar’iyyah authorizes the ruling authority to take such administrative steps and measures as it deems to be in the public interest of establishing good government, provided that no substantive principles of Shariah are violated thereby. The word 'shar'iyyah' is used here in a broad sense that encapsulates not the detailed aspects and rulings of Shariah but rather its goals and purposes. There may be instances in which addressing a situation requires decisions in which the specific rules of Shariah cannot be properly observed. Yet those same decisions capture more effectively the general purpose and spirit of the law. The ruler is thus granted discretion to determine, as time and circumstance require, how the Shariah and its wider goals are best administered. To be this, it may be necessary to postpone certain ruler when their implementation gives rise to more stressful situations, or it may be necessary to make exceptions to the general rules of Shariah. For instance, when the second caliph 'Umar postponed the prescribed share of zakah revenues for the mu'allafat al-qulub (befriended people) he reportedly acted on considerations of siyasah. Similarly, when 'Umar disallowed the distribution of fertile lands in Iraq among the warriors, he also acted on considerations of siyasah. In these cases, the caliph acted in pursuit of the higher objectives of justice and welfare at the expense of a prescribed punishment.

These two modes of siyasah- postponement of a ruling and making an exception to a general rule--are also involved, as Ibn Rushd explained, in what is know as juristic preference (istihsan). This may involve (1) the setting aside of a rule, which may consist of the existing law and qiyas (analogy), in favor of an alternative rule, or (2) making an exception to the normal rulers. The purpose of istijsan is often to prevent hardship and to seek better solutions on grounds of equity and fairness. Although there are technical differences between siyasah and istihsan, they share the broad objective of finding equitable solutions to issues when the existing law fails to deliver justice. Both siyasah and istihsan tend to involve a departure from the existing rules of Shariah. Since we harmonization, alongside fiqh ruling in our available materials for harmonization, siyasah or istihsan may require a departure from an existing fiqh rule or statutory law, making an exception to them, or simple giving preference to a fiqh rule over that of statutory law, or vice verse. 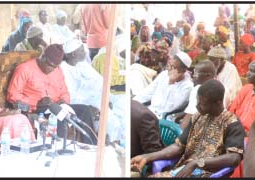