When the case was called at 9:46 am yesterday, all the seven accused affirmed their presence in court.

The court adduced that on the last adjournment date the matter was adjourned to be heard in Chambers, and asked whether DPP have his witness in court. In response, DPP Chenge responded in the affirmative.

Henceforth, the court was stood down for the matter to be heard in Chambers.

Justice Wowo made this ruling following DPP's earlier applications for his witnesses to adduce their testimonies in camera so that the witnesses' identities would not be disclosed to the public since they are security operatives.

The seven accused journalists first appeared before Justice Wowo on 8th July 2009, then charged with five-count charges, ranging from seditious publications, conspiracy to publish seditious publication and criminal defamation, to which charges Antouman Gaye, the lead defense counsel stood up to make a series of objections.

Subsequently, the state amended the charges and added up one more charges to make it six counts as aforementioned.

All the seven journalists pleaded not guilty to all the charges preferred against them.

It would be recalled that on 12th July 2009, the seven accused persons took their plea, even though the defense made preliminary objections on the first charges and further objections, that the circumstances of the offence does not make any averment to the charges, yet the court overruled them. 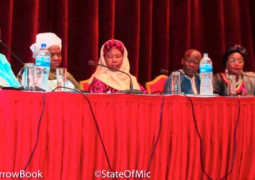