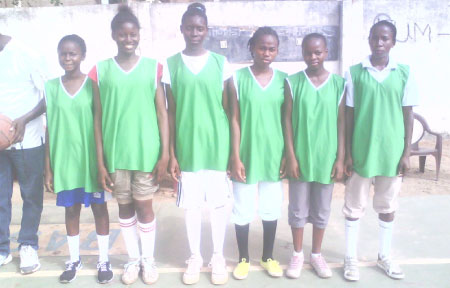 Each year since 2009 SAC collaborates with SSSA to organize this competition. The aim is mainly to provide an opportunity for the students that attend the basketball summer camps run by Pierre Jallow, founder and president of SAC and a former professional basketball player, to put into practice the skills that they have learnt from the camps.  In fact this year the girls’ teams were organized by their respective schools and they played in the competition for the first time.

The Competition was scheduled in two rounds.  The first rounds started on 23 January and ended on 3 February 2012.  The second rounds and finals were held between 9 and 14 April 2012.  Games were played at the Serrekunda Mini Stadium and the YMCA Basketball Courts.  Eleven schools of both boys and girls participated in the first rounds; in the second and final rounds a total of 8 schools competed for the boys teams and 6 schools for the girls teams.

Trophies awarded to the winning schools are as follows:

The SAC Board of Directors and the SSSA Executive Committee is grateful to the following sponsors of the competition since it started in 2009: SAC Finland, Fr Joseph Gough, University of Helsinki Students Fund, Trust Bank Ltd, YMCA The Gambia and Serrekunda West Mini Stadium Management Committee, Independence Stadium, and Plymouth Banjul Challenge.  With their support basketball is gradually gaining its momentum with the organizing of competitions amongst the school children. The next major activity from SAC is the upcoming SUMMER CAMP scheduled for 30 July to 4 August 2012.