Omar Faal, a Senegalese national, Wednesday admitted before Magistrate Junkung Jobarteh of the Kanifing Magistrates’ Court that he attempted to rape a nine-year-old girl at the Serrekunda Market.

The charge sheet read that Omar Faal, on 7 June 2014, at the Serrekunda Market attempted to rape a nine-year-old girl by undressing her to have carnal knowledge of her, and thereby committed an offence.

Following his plea of guilt, the prosecuting officer, Corporal 544 Jaiteh, read the facts of the matter to the court.

He stated that Omar Faal, on 7 June 2014, seduced the girl by giving her D2 to have carnal knowledge of her at the Serrekunda Market.

He said Mr Faal undressed the girl but was found by some Kanifing Municipal Police officers who arrested him and took him to the Serrekunda Police Station.

Corporal 544 Jaiteh stated further that cautionary and voluntary statements of Omar Faal were recorded in the presence of an independent witness called Mbye Jagne.

Corporal Jaiteh applied to tender the said statements and his application was granted.

The statements were shown to Omar Faal but he said he had no objection for the tendering of the statements.

As a result, they were admitted by the court.

After Corporal Jaiteh had read the facts to the court, Magistrate Jobarteh asked Mr Faal whether the incident happened as narrated by the prosecutor, and he answered in the positive.

In his mitigation, Omar Faal begged the court to temper justice with mercy.

He said he had been in The Gambia for a long time and had never involved or committed an offence.

Magistrate Jobarteh, in his judgement, told the court that the offence committed by Mr Faal was serious.

He said if Mr Faal had succeeded to rape the girl, he would have destroyed her future.

He further posited that the court would punish Mr Faal to serve as deterrent so that such girls would be safe from the likes of Mr Faal.

He subsequently sentenced him to 24 months in prison. 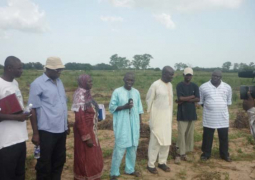