One Momodou Wuri Bah, a youth residing in Bakoteh was Wednesday 25th brought before the Bundung Magistrates' Court before Magistrate Kumba Sillah Camara charged with stealing contrary to section 252 cap 10 volume 3 laws of The .

According to the facts as read in court by the prosecutor, Momodou Wuri Bah on or about the 21st April, 2008 at Bakoteh, broke into the house of one Abdou Malick and stole from him a radio cassette player and D11,000 cash.

When the charge sheet was read and interpreted to him, he pleaded not guilty.

While rendering his testimony before the court, PW 1 Abdou Malick told the court that on the date in question, he closed his house and visited his friend, Bandinding Saine. On his return he added, he found his padlock destroyed and noticed that his radio and money amounting to D11,000 were stolen. He added that he then quickly rushed out of the house and followed the suspect's footprints until he caught up with him at a cross road where he saw him carrying a black nylon bag. He then asked him what was in the bag and where he collected it from. The accused person in response, told him that the items contained in the bag were given to him by a friend whose name he refused to disclose.

He then reported the matter to the police and the accused was arrested.

The case was at that juncture adjourned to .

Previous:
Woman Given Over D100,000 Bail for Theft
Next:
Woman Sentenced 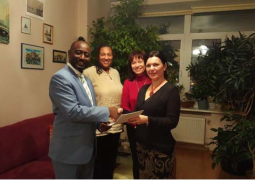 GPA draw with Hawks in friendly