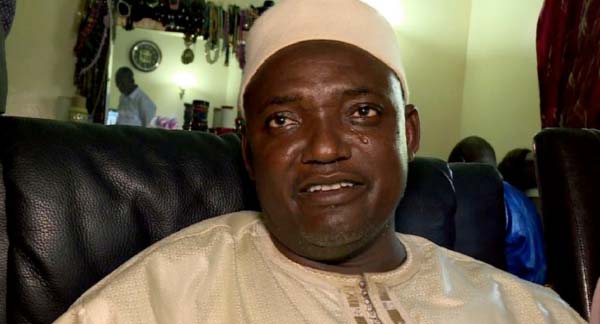 The relationship between The Gambia and Senegal is to take a new dimension as president-elect Adama Barrow said the former French colony would be his government’s number one friend.

In an interview with the Senegalese media, TFM, President-elect Barrow reiterated that The Gambia, under his rule, will unite and be a friend to all countries, “but the country that will be our number one friend is Senegal”.

The Gambia is surrounded by Senegal on all the sides, except the Atlantic Ocean and the two countries share almost everything: social, cultural, religious ties and ethnic groups.  However, the political relationship between the sisterly counties has been thorny for the past two decades.

Barrow, who defeated incumbent president Yahya Jammeh at last Thursday’s presidential election, noted that Senegal is closest to The Gambia, and “a close friend is more important to us than a far friend”.

He said the rejuvenated friendship will benefit both countries, because any benefit that comes to Senegal will reach The Gambia and vice versa.

The president-elect said when the result of the election was announced, the Senegalese president, Macky Sall, was the first president to call and congratulate him.

“During our conversation, President Sall asked whether I can speak Fula and I told him, yes; my mother is a Fula,” Barrow said, adding that their conversation later continued in the Fula language.

He said he would first visit Senegal after taking over, to discuss with President Sall and the Senegalese government.

He said Sall is more experienced than him since he (Barrow) is new and, as such, he would learn from his Senegalese counterpart.

Barrow said shortly before starting his campaign, he was in Senegal to see the Mouride Kalipha, Serigne Sidi Moctar MBacke, to seek prayers from him, and he promised to visit the Kalipha after the election.

He said the Kalipha had interest in his candidature, and even instructed his protocol to call him during the campaign period to enquire how things were going.  The Kalipha also sent people to come and observe the election.

Speaking on the election, president-elect said Gambians wanted the opposition to unite, for that was the only way to remove the incumbent.

As a result, the opposition parties made efforts to come together to form a coalition, which he was elected to lead.

With the support of several Gambians, particularly those in the Diaspora, the campaign begun and it went smoothly.

The social media, he said, contributed greatly to putting their messages across, because “in The Gambia as an opposition, you are not given a platform on the national television”.

“The social media was our television, showing our programmes and it was through social media we made our meeting announcements.  Social media has been one of our weapons heading to the election,” Barrow explained.

He noted that all the three contestants on the election are 51 years old, but Gambians chose the coalition.

Now that election is over and victory is theirs, he said they are working on setting up the cabinet.

“Before any government can work effectively, it needs to have its cabinet in place.  So we are setting up our cabinet and we will select experienced people we have faith in to man various ministries.”

After the transition, when the handing over is done, anything that concerns the government will be looked into, and laws and programmes will be in place to guide the government.

Asked about outgoing president Jammeh, Barrow said Jammeh is a Gambian as any other Gambian and The Gambia is more important than all of them, him and Jammeh.

He said Sir Dawda Kairaba Jawara used to be the president and today, he is no more the president but he resides in The Gambia.  If Jammeh also wishes to, he can live in the country as a private citizen.

He explained that when Jammeh is in the country, if they need any help from him, they would approach him.

“When we were coming to contest the election, we didn’t have the intention to fight or didn’t dislike anyone or say this is what this person has done and we should pay back.

“This is not our focus, but when we take over we will investigate what had happened and, if there is evidence, we will take necessary measures.  The government is here to protect all citizens, but the law will take its course.  The president will not be there to dictate the law, but we will not compromise on what the law says.”

Asked if he would not change his mind on the three years for which he said he would hold office, Barrow said it is not easy to believe anyone in terms of government in Africa, but Allah has helped him in the sense that he is a contented person.

“Gambia is what interests me. I will go by the three years that I agreed to rule,” he said.  “We plan to accomplish a task within three years, and we will work day and night to ensure that we accomplish that task.  In the event we are not able to complete it, the government to come after me can take over from where we left off.”