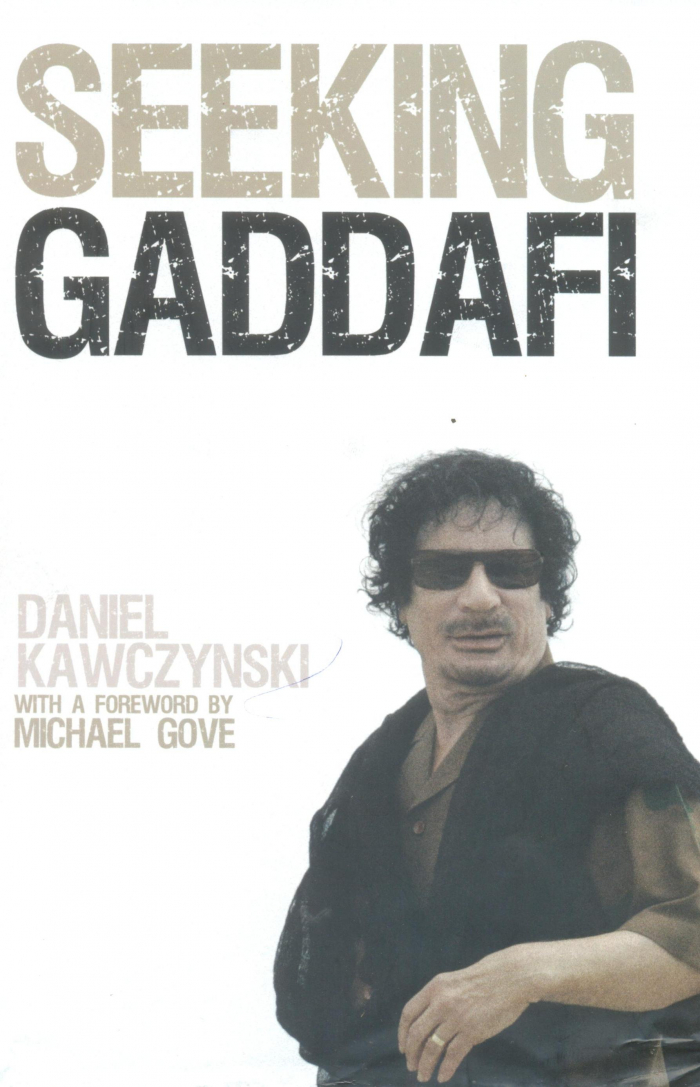 WHERE IS GADDAFI?
At the time of revising this review, opposition forces were fervently searching for  Colonel Gaddafi in the secret holes in Tripoli since he has apparently fled his former fortress called Bab Al Azizah, which the rebels over ran on Tuesday night. The fall of this sprawling compound and the desecration if his huge status, large tents and similar objects symbolize the fall of this long ruling leader. The images of opposition fighters cutting off and kicking the bronze bust of the fallen leader reminds one of Percy Bsshe  Shelly’s poem ‘Ozymandias’ about the fallen statue of an Egyptian pharaoh.

‘There is an awful lot of white noise surrounding Gaddafi. So extreme are his eccentricities, so bizarre his pronouncements, that the real nature of the man and his ambitions gets buried. It is very difficult to know what kind of a man hides beneath the clothes, the tents, the female bodyguards and directionless rantings’, so said the author who is a sitting British MP, who during his work at the Foreign Office, was able to get access to the currently embattled Libyan leader.

The book seeks to explain the enigma and labyrinthine mystery that Gaddafi is. Many people have met him in the past 42 years he leads Libya, but few can understand him. This is what Kawczynski seeks to do. He divides the book into 13 chapters from ‘The Making of Gaddafi’ p.1 to ‘After Gaddafi’ p.234. In the midst of this, we are treated to all possible aspects of the Libyan strongman, who has since February 17 faced a revolution by people dissatisfied by his very long rule.

As one reads through this book, one gets a good feeling as to why Libyans revolted six months ago. The workings of the Police state of fear that he has crafted becomes clear:  where citizens’ email, telephone messages are monitored by the paranoid regime, p.208; the mass executions of perceived opponents of the regime, p.211; public hangings p.196 etc. In addition, internationally, Gaddafi has been a thorn in the flesh of many other countries in Africa, Europe and elsewhere where at various times he has been accused of attempting the destablise. This is enough fodder for his people to rise up.

Yet, the author credits the Libyan strongman with giving up on his country’s nuclear weapons programme which enticed the West to lift the punitive sanctions against Libya imposed in 1990s over the Lockerbie terror attack. Another focus of the book is the predominant role of the Gaddafi children and relatives in the Libyan affairs p.242, 243: one son heads Libyan Olympic, another heads an elite army unit, another is important in investment affairs, a daughter Aisha is a lawyer, and an in-law, Sanusi, is head of intelligence, p.211 etc etc. ‘Gaddafi’s children are omnipresent in Libyan society’, writes the author, p.236. This clannish domination is also partly responsible for the current revolt. Now that the regime has collapsed, what will be the fate of the Gaddafi Clan?

Another reason is the dire economic state which the authors says Libya is in . ‘ Libyans’ working lives are unusual.. Nearly three quarters of them are employed in a soggy, unproductive state sector…’ p. 202. This means that the mostly youthful population lack productive employment, and have seen in this revolt an opportunity to better their economic state. His involvement in the sordid Lockerbie incident is well discussed in p.156, 157.

At the time he was writing, the author could not, like many other observers, foresee the uprising against the Gaddafi regime. The façade of normalcy was there. But reading through the book, one gets a good impression that all what is now happening, had been primed waiting to go off at any moment.

The concluding words of the author are prophetic: ‘One thing about Gaddafi I will give to him is he does not compromise his position at all, he is absolutely ruthless, he probably realized to stayed in power you would have to be like that. Plus he is not a mutt; he is very smart, he has a natural Bedouin intelligence. He is not intellectually very elaborate, but he is cunning and ruthless’. This is why he continues to make incendiary speeches and will not listen to anyone. This is a valuable and instructive book which is good reading more so in these days when Gaddafi and his miserable revolution seem to be consigned to the footnotes of history. The questions has therefore changed from ‘Who is Gaddafi’,  to ‘Where is Gaddafi’. How the mighty call fall!