Buba Sagnia was arraigned before Principal Magistrate Hilay Abeke of the Banjul Magistrates’ Court and charged with abuse of office and neglect of official duty.

The prosecution’s fourth witness (PW4), Fatoumata Jallow, told the court that she knew the accused person as her former boss at the Immigration department.

She said in October 2013, one Mr. Joof, the second prosecution witness, entered her office with an approved entry clearance paper from the accused person’s office.

“I was asked to type the said approved clearance form, which I did based on the approval on the said entry clearance form, and I returned it to him and he took it back to the accused person’s office,” Jallow said.

She said the entry clearance certificate was made in respect of one Syrian national and a Lebanese national.

Mr. Joof, the second prosecution witness, was not an immigration officer, the witness further told the court.

She also confirmed the entry clearance paper she typed in court, and the form was tendered in evidence and marked as an exhibit.

Testifying under cross-examination, cadet Jarju said the difference between the entry clearance and visa was that visa is endorsed or press-made on the passport in the form of a sticker, whereas the entry clearance form is a paper issued as a mechanism to control the movement of people into the country.

He said non-ECOWAS citizens required a visa, and it was issued to them by the Gambian embassies abroad and their consulates.

He said the entry clearance was a requirement for someone to have admission into the country, and while the visa could facilitate his or her movement in the country.

The immigration authorities have two types of visas, single-entry visa and multiple-entry visa, according to the witness.

The single-entry visa finishes upon an arrival in the destination, while a multiple-entry visa allows you to come and live in that particular country.

He added that the specific months are to be stated on the passport, such as 3 months and 6 months, as long as the passport remains valid.

Asked by the defence counsel, Edward Signhateh, who determines the duration of stay, the witness told the court that it is the immigration director.

He said it must be clearly understood that the possession of a visa or entry clearance does not guarantee admission into The Gambia.

Also possession of a visa or entry clearance is still subjected to compliance with the immigration Act and regulations upon arrival.

The case was at that juncture was adjourned to 19th March 2014.

Ex-Director General Buba Sagnia alias Zil was alleged in count one to have, on 28 October 2013 at Immigration headquarters in Banjul, whilst being employed as the Director-General of the Gambia Immigration Department, acted in excess of the powers of his office and issued entry clearance to Ali Chahin, a Syrian national, and Hussein Abs, a Lebanese national, without forwarding the same to the National Intelligence Agency office for security screening, and thereby committed an offence.

Sagnia, it was further alleged in count two, issued an entry clearance certificate to Ali Chahin and Hussein Abs without forwarding same to the NIA for further 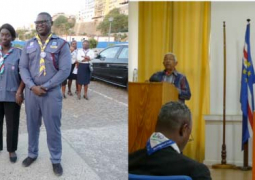