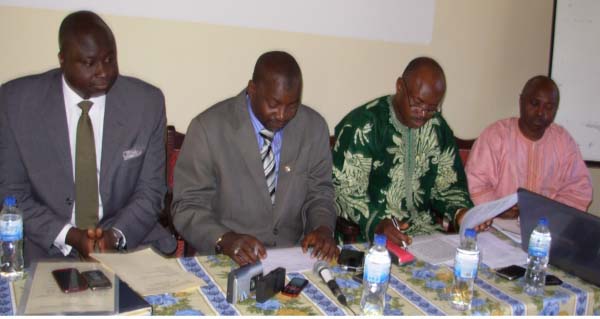 He said he has no doubt that the important resolutions and recommendations that were generated at the last forum warranted this three-day gathering.

Momodou Gassama, Nema project director, said Nema is a seven-year (2013 - 2019) Project designed to build on the achievements and experience of earlier IFAD supported projects in the agricultural sector.

“It is a response to GOTG request to IFAD for a substantial project that will contribute to the implementation of the Gambia National Agricultural Investment Plan (2011 – 2015), particularly Programs 1 and 3. Improve Agricultural Land and Water Management and Develop Agricultural Chains and Market Promotion in efforts to alleviate food insecurity,” he said.

The overall goal of Nema was to reduce poverty of rural women and youth, he said, adding that the development objective was to increase incomes from improved productivity based on sustainable land and water management practices.

The geographic coverage of the project was defined as all six Agricultural Regional Directorates along the River Gambia, essentially the whole rural sector, he added.

As a follow-up to the first dialogue forum ever, he added, the Project Steering Unit had decided to conduct a second forum in which it plans a plethora of presentations by service providers and stakeholders, as well as chart a way forward for meaningful cooperation and implementation.

Governor Lamin Sanneh, said Nema project was in direct response to government’s formal request to IFAD to lead in the implementation of the Gambia National Agriculture Investment Plan 2011-2015.

To him, Nema project was one such project which aims at enhancing food security and poverty reduction in The Gambia, a phenomenon regarded as a priority for the Government of The Gambia.

He said the project would tackle limited productivity and the land used for farming and poorly developed domestic markets that generate very low real demand for the smallholder producers.

Ousman Jammeh, Regional Agricultural Coordinator for West Coast Region, stated that as dictated by the magnitude and significance of this project, which was the most expensive agricultural project so far initiated in The Gambia. It therefore deserves their undivided attention so that they grasp the cardinal issues for further genuine discussions.

“It is therefore incumbent upon all of us to be critical in our approach but constructive, as well as advance suggested panacea to any issue one is critical about,” he said.

“I must also state that, although I salute and applaud The Project Directors’ numerous emphases on ensuring work through its implementation agencies. I encourage him and his team to live up to expectations and hence mark a significant departure from the mode of operation of many standalone agricultural projects,” he emphasised.

He said the project team must endeavour to share information, ensure transparency within the team, the implementing agencies and beneficiaries with regard to all relevant key aspects of the project.

This, he went on, would engender common understanding, ensure a level-playing field, as well as ease implementation of the project activities.