The Scorpions, who lost 3-0 to Ivory Coast on Saturday, are expected in Banjul tonight.

The team, guided by Coach Mancini to put up a good performance in an international  against Niger by beating Niger National team 3-1 just three days before their match against the Elephants, left fans disappointed on their weekend result.

The foreign-based players left Abidjan on Sunday evening to their respective playing destinations.

Abdou Jammeh, Momodou Futty Danso and Momodou Ceesay scored for the Scorpions during the friendly.

The best Scorpions performance in the World Cup qualifiers was just a draw against Morocco. They lost 2-1 to Tanzania and the Saturday defeat to Ivory Coast in group C.

Meanwhile, football fans in Abidjan on Saturday commended the Elephants of Cote d’Ivoire for their victory in the World Cup qualifier against the Scorpions of The Gambia.

With a goalless first half, the Elephants opened scoring on the 48th minute and went ahead to consolidate their victory with two other goals in the 59th and 70th minutes.

Some fans of the team told the News Agency of Nigeria (NAN) in Abidjan shortly after the match that the victory was ``a relief of tension’’.

The fans expressed gratitude to the team for making them happy after their outing at the last African Nations Cup in South Africa.

One fan, Rahim Yaya, said the victory had returned part of the lost confidence of the fans on the team.

“We have been waiting for the team to make us happy; this victory has just brought us joy.

“I am sure that many supporters who had lost confidence will return their support due to this victory,” he said on www.leadership.ng. 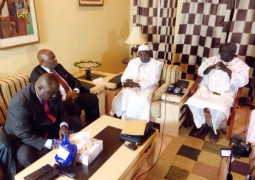