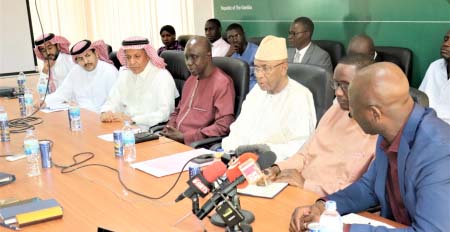 BRUSUBI- The head of the visiting delegation from the Saudi Fund for Development, Special Adviser Eng. Yousef I. Al-Bassam has expressed delight at the state of progress of the ongoing project implementation works for the 2022 OIC Heads of State and Government Summit in The Gambia.

Special adviser Yousef I. Al-Bassam made the remarks on Tuesday during a courtesy call on the management of the Secretariat in Brusubi to acquire first-hand information on the ongoing infrastructural works for the Summit.

The Saudi Fund for Development is one of The Gambia’s foremost partners for the OIC projects providing financing for the building of a VIP Lounge at the Banjul International Airport, the construction of the 20 secondary urban roads, and the Electricity Network Enhancement Project and Rehabilitation of Water and Sanitation Networks Project – all of which are overseen by NAWEC.

Heads of the implementing agencies of the various OIC projects like the National Road Authority, Gambia Civil Aviation Authority, and NAWEC were present to give a detailed presentation on the status of projects being supported by the Saudi development agency.

Chief Executive Officer of the Secretariat, Mr. Yankuba Dibba warmly welcomed the delegation and thanked the Saudi Fund for their immense support to the country’s bid to hosting a successful Summit. “We cannot thank you enough for all you have done for us for the summit. We are quite grateful,’’ he said.

Director of Water Services at NAWEC also thanked the Saudi Fund for coming to their aid in supporting the improvement of their generation and distribution capacities in both the water and electricity components. He said the projects could not have come at a better time and will go a long way in improving the living conditions of the Gambian people.  The shortlisting of consulting firms has been completed and soon the responsive bidder will be selected, and works will begin for the design phase.

Similar comments were made by the Managing Director of the National Roads Authority, Momodou Senghore, as well as the OIC Project Manager of GCCA, who stressed that they are on course to complete the building of the Presidential Lounge in time for the 2022 Summit.

The Saudi Fund delegation is in the country to sign a $12 million grant for the Airport Expansion Project.