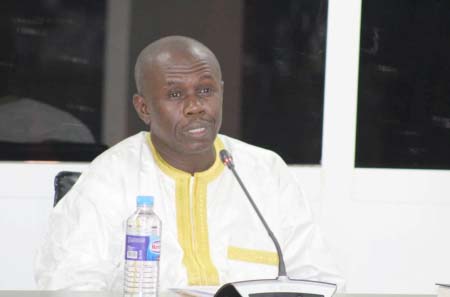 Ousman Jammeh, a victim of the Jammeh regime yesterday testified before the TRRC, giving accounts of his unlawful arrest and one and a quarter year detention at Mile 2 Central Prison.

Born in Lancaster Street in Banjul, Jammeh, having served as a deputy minister of Agriculture for three to four months under former President Yahya Jammeh, was arrested and imprisoned.

He recalled that in 2011, Rice Farmers Cooperative Society wrote to the governor of CRR, stating that they were not satisfied with the leaders of the association because they didn’t declare the amount generated from the farm implements they rented out, and monies of the association were not accounted for.

He said the complainants were advised by the chairman of the Area Council who deputised for the governor in a meeting, and suggested that they should report the matter to the Agricultural Office since the matter related to farming.

He said after they all spoke during the meeting and advised them to solve the matter amicably.

He added that after the meeting, the matter was resolved amicably and there were agreements.

“However, after an election, the outgoing executive refused to hand over power to the new executive.”

Mr. Jammeh testified that the outgoing executive refused to hand over the farm implements belonging to the association and bank accounts as well. He said it is the responsibility of the government per the Act because the Department of Agric Business was supposed to account for them but decided to sit for seven years without accounting to the cooperative.

According to him, the problem could not be resolved as expected because there was political interference and those in the opposition side took the matter to court and they won the case.

He added the Sheriff Division was instructed by the then minister of Justice to enforce the judgement.

“Prior to that, Mr. Ebrima Jawara was instructed by the director general of Agriculture to investigate the matter which he did but during the course of the investigations, the outgoing executive refused to turn up. They informed Jawara that they can’t go to Sapu for the meeting because he (witness) was siding with them.”

He said they then identified the Visaca office but they failed to turn up and consequently suggested to have the meeting at Alhagie Harouna Mballow’s compound. According to him, he also turned that down on the grounds that he did not want political intrusion.

Mr. Jawara eventually wrote a report but to his surprise, his (Jammeh) side of the story was not in the report and this triggered him to respond to the report written by Jawara.

The witness further indicated that the only thing which was implemented in that report was removing him from CRR.

He said while he was there when they sent Waa Juwara and Lamin AMS Jobarteh, former ministers of Local Government and Justice respectively.

However, he said the said ministers held a meeting at Harouna Mballow’s place; adding that there was no prior notice that the ministers were coming to his domain.

Despite that, he said, he answered to the minister and explained what he understood about the matter. However, Minister Jobarteh told him that he had annulled the elections because majority of the women were not represented and said they would reconduct the elections and committees were established.

At this juncture, documents of the Annual General Meetings of the Cooperative, namely photos and minutes of conflict resolution were admitted as evidence.

Subsequent to Jawara’s investigations, the said ministers also conducted an investigation and recommended that a sensitisation be held across the villages to enable them participate in the voting process.

He said during the sensitisation, they went up to Fula Bantang and in the course a vehicle hit one Mr. Touray and broke his two legs.

He said the police called him to Serious Crime Unit because one Ma Marry Baldeh wrote a letter to the police. However, Ma Marry had denied writing to the police as she was sick and admitted at the hospital.

He alleged that it was former National Assembly Member, Yerro Mballow who impersonated and wrote the letter against him.

Mr. Jammeh told the commission that his transfer was unfair despite both ministers’ recommendation for his transfer.

However, he agreed that the transfer was lawful.

“They did not violate my rights but they violated the rights of the region.”

He admitted that all that he was pointing out was an administrative irregularity which was not tantamount to a violation of a constitutional right.

In a High Court judgment dated 2012, the court recognised the newly elected executive as leaders of the cooperative.

According to him, a few days later, members of the executive were arrested and detained by the NIA. But he (Jammeh) told to them that they did not do anything wrong and should be released, which was effected.

Mr. Jammeh recalled that while attending the celebration of the World Food Programme in Basse, he received a call informing him that former VP Isatou Njie Saidy said he should stop all what he was doing and report back to the Kombos.

The witness further recalled that while on the journey, he was constantly called by the NIA and upon arrival; he went to the home of the former VP who handed him a dismissal letter as deputy minister.

However upon arrival at the Quadrangle, he said, he found two NIA officers standing, who told him that they were instructed by the NIA director to arrest him.

Mr. Jammeh informed the Commission that he was later taken to the NIA and after a while they brought one Sheikh Omar Colley from Jabang who was subsequently taken to Janjabureh Prisons.

He said after he did the handing over, he was taken back to NIA but was subsequently transferred to Mile 2.

“I spent 1 year 3 months and seven days and I was not allowed any visit,” said Jammeh. He added that he was taken to the Maximum Security Wing of Mile 2.

Witness testified that while in confinement wing No.5, they provided him with a mattress together with a mosquito net and chamber pot.

In terms of food he said he had never seen worst food than that of mile 2.

To avoid malnutrition, he said his people brought him vitamin tablets; adding he was not physically tortured by the officers but was kept in a cell for 23 hours, which resulted to physiological torture.