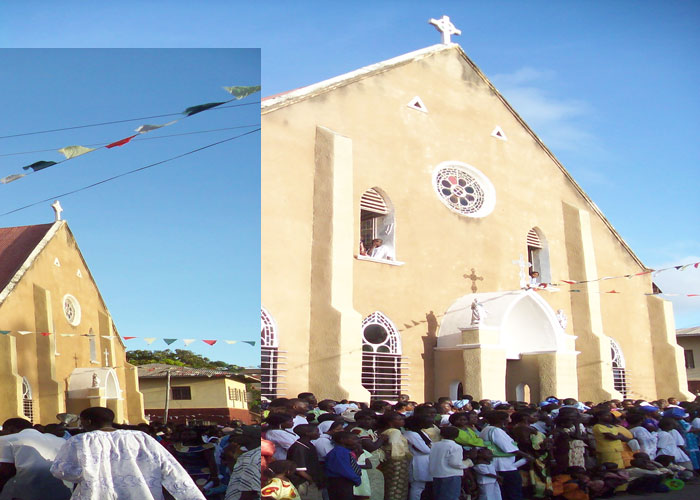 Sang Marie, a distorted form of Saint Mary, is celebrated on every August 15. This is the feast of the Assumption of Mary, the Mother of Jesus and the Church. The first Portuguese Missionaries who sailed through the to The Gambia fortunately stepped on the Gambian soil on 15thAugust to expand Catholicism as ordered by Jesus Himself. He then ordered His Apostles to go in twos into the world preaching the Good News, saying if they were welcome let them stay and ordering them to take no tunic with them. They came to the and they stayed on and on.

Such was the compelling reason for the first Portuguese Priest of the Catholic Mission to the country. They named the Anglican Cathedral after Mary and the Catholic Cathedral was named after Mary and the feast of her Assumption. They anchored and named Cape Saint Mary and Kombo Saint Mary's Division. Mary then became the patron saint of The Gambia. Many people carry the name and the distorted name too.

Catholics have special love and devotion to the mother of the church and in many ways has worked miracles for those who ask Her to intercede for them to Jesus, her Son. She has manifested herself to children at and to many elderly as well. To the Catholics, Mary plays a vital role in their lives and in their salvation. She was there when Jesus said to Her, "Mother, behold thy son and to the son, Son behold thy mother." From that point she became the mother of all who believe in her Son Jesus. She has never left her children alone and has continued to stand behind them.

The Cathedral of the Assumption of Mary in had become the home for Mary in the . As a result the past deliberations including the recent one was organised by the Assumption Parish Council with the guidance of Rev. Fr. Edu Gomez, the Cathedral Administrator.

The expectations for showers of rain were thrashed when the rains fell a day before the celebrations Rain is significant as it is regarded as showers of blessings. There was no rain and thousands of Christians and Muslims in attendance followed the procession across the city. Sweat replaced the rain and the elderly remembered the past where rain washed them during the procession. Many blamed it on climate change that is affecting the world.

The Cathedral area was over crowded as the benediction continued. Meanwhile, preparation went ahead with foodstuff, music, the Army Band as they entertained the congregation. "This year's celebration is the best," says David Noah from Star of the Sea, Bakau.

They praised Fr. Edu for been an implimenter, from word to action" and that's what is important."

He is optimistic that the rains will come next year to wash away their sins.

The day ended with merriment. The whole country celebrated the day in their own way.