The United States Embassy in The Gambia recently organised a one-day workshop in the use of the Internet for over 30 Gambian journalists from both the print and electronic media. Among the media houses and organisations represented were The Gambia Press Union and Media Agenda. The training was held at the Embassy's Conference hall, located at its offices along .

The participants, who were drawn from various media houses such as the The Point, the Daily Observer, Foroyaa, , Today, Gambia News and Report Weekly, The Gambia Daily and the Daily Express. The presentation, on Internet research was done by Stephen M Mallinger, information resource officer at the embassy of the in .

Barry L Wells, the Ambassador to The Gambia visited the participants during the training. He thanked the participants for honouring the invitation to the workshop and advised them to take the training seriously. He urged them to put what they had learned into practical use and hone their skills. Ambassador Wells finally expressed the desire of the Embassy to further collaborate with the media fraternity and provide more training opportunities.
Mohamadou M. Njie, public diplomacy and cultural affairs assistant at the US Embassy, thanked the US Embassy for organising such an important training for Gambian journalists. He also advised the journalists to make the best use of the knowledge gained during the internet research training course.

For her part, Marie Chery, an assistant Internet manager with The Point, said, "I am very happy to be given such an opportunity as this to attend this kind of training. As our trainer said most people learn how to use the Internet by themselves and through eny formal training so this makes me very proud to have this opportunity. I thank the authorities here at the American Embassy for organising this training which is vital for journalists."

Sheriff Barry, a reporter with the Daily Observer, said such training will add value to his profession as a journalist. He thanked the US Embassy for helping Gambian journalists. 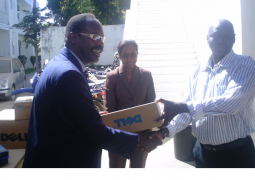