The materials were presented at a ceremony held at Brusubi turntable junction courtesy of Sanchaba Sulay Jobe community.

Speaking at the presentation ceremony, Pirjo Latomaki Jagne, the project manager of Cultural Association Gepardi, disclosed that she has been coming to The Gambia since 2000.

She said the donation was the first time they were given out to the health sector and expressed hope that it continued.

According to her, they have been working with different people and communities in The Gambia over the years.

In receiving the items, the alkalo of Sanchaba Sulay Jobe, Pa Hassan Jobe, commended the donors for the gesture, saying the donation would go a long way in helping not only the people of Sanchaba and Sukuta but also The Gambia as a whole.

Aunty Amie Sarr, head of the Sanchaba Women Association, and Babucarr Secka, a youth leader, both thanked the donors for the wonderful materials, whilst calling on other associations to emulate the donors.

Ebra Faal, the Sukuta ward councillor, and Alfusainey Gano, the project coordinator, both expressed pleasure to be associated with the development.

Previous:
Who will help Bakary Gakou?
Next:
TANGO organizes workshop on stigma and discrimination in HIV/AIDS 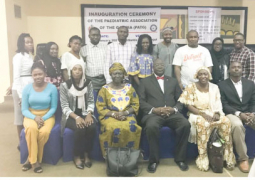