The 's afro-manding musician, Sambou Suso recently returned home from after a successful musical tour. The afro-manding came with the promise to release her second album before the end of 2009.

Briefing Entertainment in an exclusive interview at her residence in , Sambou Suso described her trip to Europe as very successful, noting that the purpose was to attend a musical festival in organised by the French government.

The Gambian Queen afro-manding explained that her tour was also a total success, noting that during the tour, she was able to meet with movers and shakers of the European music industry.

From , The Gambian Queen proceeded to , where she attended the 22nd July Revolution celebration organised by The Gambian Ambassardor to . "So all that was a great experience because I was the first Gambian artist to performed in Last Palmas", she said.

Sambou Suso finally ended her tour in , where she also attended a music festival in . She spent two months in . "During my stay in , I worked on my album and the album is sponsored by my manager Pamodou Njie. Currently, we are heading to Acoustic music because we need to target the international market more" Sambou revealed.

Sambou commended her Manager, The Gambian Ambassador to , and all Gambian residing in for their support during her stay in . 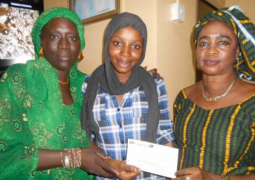 The other side of the fuel price increase