The Chairman of West Burg Rugby Club in England Ken Boulton who is currently in on Saturday afternoon presented 30 shirts to the Gambia Rugby Association, at the Independence Stadium amounting to 1,500 pounds.

Ken Boulton who expressed his ambition to help Rugby presented the donated items to officials of Gambia Rugby Association, on behalf of West Burg-On-Seven, a local Rugby club in , aimed at promoting and developing in the country.

According to Ken Boulton, the gesture came from a local Rugby club, called West Burg-On-Seven through Peter Gomez of West Coach Radio, whom he met while in for a holiday as far back in 2006.

"I decided to come up with this donation because it will help to gain international recognition if the right materials are in place to ensure the smooth running of  in the country," Ken Boulton told our reporter shortly after the presentation.

The presentation was attended by the Development Officer who doubles as the Secretary-General of the Gambia Rugby Association, Abdoulie Bai Cham, the two representatives of the National Sports Council, Abdou Aziz Titao Mendy and Cicilia, who all thanked the donors for what they described as a wonderful initiative which will go a very long way towards improving and uplifting the standards of Rugby in the country.

The association has also took part in the Senegalese Professional Rugby League in from 1983-1984 with some great results to be proud of. 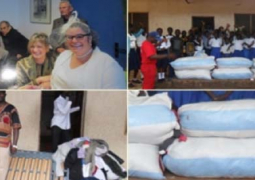