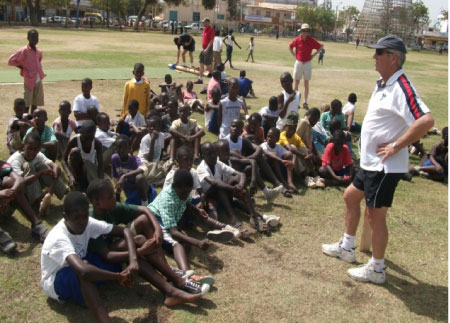 The Gambia Cricket Assocation recently concluded a marathon of activities; below is a highlight of the key events.

On 25 February 2012, over 50’s, who were recently on tour to The Gambia, won the toss and decided to bat scoring 104 runs with 5 wickets, in their allotted overs of 25, their highest scorer is Barry Paey with 29 runs.

On 26 February 2012, Jewel of versus over 50’s: The Jewel of India won the toss and decided to bat, and scored 232 runs for 7 wickets in their allotted 25 overs. Mr Asif Adav was the highest scorer with 81 runs not out, and took one wicket for 26 runs.

The over 50’s batted next and scored D139 runs all out in 25 overs with three wickets in hand. Their highest scorer was Allan Wyatt with 48 runs. The man of the Match is Mr. Asif Adav of Jewel of India.

The items were handed over to the President, Mr Johnny Gomez, who received them on behalf of the Association, and thanked the over 50’s Touring Party, for their magnanimous gesture to help develop cricket in The Gambia.

He further re-irritated the fact that these items came at the right time, that the senior team is preparing for the Division 3 Tournament in , In April, 2012.

The Leader of the Tour, Mr Andrew Sanks, said they have made a pledge to help Cricket to develop the game, getting the game to the schools, and they will as much as they can continue to help the development efforts of the GCA.

The Girls Coaching Clinic was held this morning at the July

22nd Square
, in , with 9 schools, each coming with 13 students, and their P.E. Teachers. The total number of students that took part was 118 girls that are registered.

The Coaching Clinic for boys in schools in , will be conducted at the July

22nd Square
in . The numbers of students registered are 130 boys, with their P.E. Teachers.  A Cricket Match with over 50’s, followed after the Coaching Clinic. The Schools boys batted first and scored 155 runs for 4 wickets in their allotted 20 overs, with an opening partnership of 104, between Mustapha Suwareh (50 Runs) and Ousman Bah (48 Runs). These are all players of the Under 17 and 19 teams.

The over 50’s bated next and scored 114 runs for 4 wickets down, in their allotted 20 overs. Their highest scorer is Mike Plumrigde, with 30 runs. The man of the match was Mustapha Suwareh of , who scored 50 runs, and took 1 wicket in four overs for 14 runs.

The other game was between ’s and Rev. J. C. Faye Memorial School, who did not show up, so the points were given to ’s .

Methodist batted first and scored 53 runs with 8 wickets down, average of 6.625. The Highest scorer was Moses Ogoucha with 11 runs. St Mary’s Lower Basic batted next and scored 53 runs and lost 11 wickets with an average score of 4.818. The winners were St. Mary’s .

The other match was played between Campama and Albion Lower Basic School Albion batted first and scored 60 runs with 12 wickets down, and their average score was 5, the highest score was Papa Dan Jobe with 11 runs.

Sussex Over 50’s versus Gambian Selection won the toss and batted first scoring 201 run in their allotted 25 Overs, with Moses Bahoum scoring 101 Runs.

The Sussex Over 50’s batted next and could only manage 132 runs, with Malamin Fofana, alias Faraba, scoring 24 runs, and Johnny Gomez, Honorary Member of Sussex, over 50’s, scored 17 runs and took 2 wickets for 25 runs in 4 Overs. The man of match is Moses Bahoum

This coaching clinic was the School Girls from Brikama and its environs, with 11 schools in attendance, and 13 students from each school, with their P.E. teachers, making it a total of 154 participants.

These students were taught the fundamentals of the game - Bowling, Batting and Fielding. Some snacks were given to all the participating students.

After the clinic the president of the association talked to the students about the plans of a School League in the region, and encouraged the students to take up the game more serious, which is not only a sport, but also a mode of life that teaches the core values of life, honesty, integrity, commitment, loyalty, devotedness, creativity, etc.

He promised to help Brikama with all the resources needed to start a School League, as soon as possible, for all the streams of schools in Brikama.

This day was set for school boys, who also went to the same coaching g programme that the girls went through the day before at the same venue, Brikama, at the Box Bar Mini Stadium, with 11 schools attending, coming along with 13 students and their P.E. teachers, making it a total of 154 students.

Mr Sheriff Jallow spoke on the occasion and urged the teachers that they should not give up on the students who are keen and ready to play this beautiful game.

The Sussex Over 50’s Tour ends today, and 12 members of the team had al courtesy call with the Ministries of Tourism and Sports, and held talks with officials of both ministries about promoting Cricket Tourism in the and other European countries.