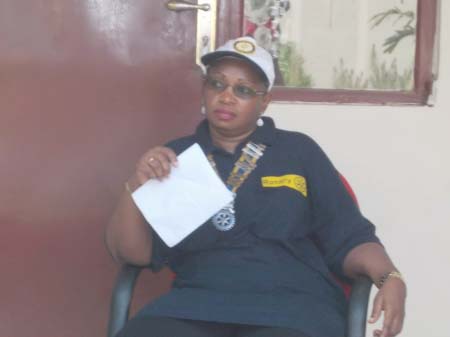 After a comprehensive summary of her one-year tenure as president of the Rotary Club of Banjul, Rotarian Fatou Bah has handed over the presidential baton to her successor, Rotarian Abdoulie Cham.

At a well-attended handing-over ceremony held at the Kairaba Beach Hotel on 29 June 2016, Ms Bah said: “Finally, the time has come for me, with great pleasure, to hand over the presidential chain of office to Rotarian President Abdoulie Cham, President Rotary Club of Banjul 2016/17. I congratulate you and hand over the baton with the theme: “Rotary Serving Humanity.”

Mrs Bah said it seemed not like four years from the day she joined the Rotary Club family through the encouragement of Rotarian Fatou Bin Jobe.

“So I became a member, and I never regretted it,” she said, while delivering her end-of-term speech.

“Over a year ago, when Rotarian Francis Jones asked me about the possibility of assuming the presidency, I will admit, I was probably still assessing my level of involvement in Rotary, at least subconsciously,” Ms Bah recalled with sadness in the midst of excitement, as she looks at what the future holds for her in her service to humanity.

“I had been a member for only a few years at that time, but don’t get me wrong, I was enjoying it, but I probably, because of the nature of my job as a Branch Manager in the biggest nationwide bank; yet because of my belief in the Rotary ideal of ‘Service Above Self’, I agreed to take on the President’s role for 2015/16. Now, in what seems like a blink of an eye, my tenure is at an end,” she told an apt audience of Rotarians and other eminent personalities in attendance.

“As this Rotary year closes, I stand proud more than ever to be part of this great organization: one that makes the world not poorer, but richer, replaces despair with hope, raises up those whom fate has brought low; and more importantly, a gift to so many, while allowing each of its members to be a gift to the world,” she said of the Rotary family.

Rotarian Fatou Bah said whenever one comes to the end of a worthwhile experience like being the President of a Rotary club, especially a club like the Banjul Club, there is always a mixture of emotions.

“For me, these emotions consist of: relief – that those weighty responsibilities are coming to an end; sadness – that what you’ve enjoyed and taken for granted will no longer be available to you, and among many others; excitement – looking forward to taking what has been learnt in the past  Rotary year to  solve future challenges of Rotary and the wider world.”

Ms Bah said under her tenure they had had some major accomplishments in the year.

“While I intend to make a comprehensive list of them in the annual report later this year, I want to share the following highlights with you now,” she said.

“These I believe are some of the major accomplishments: Completion and handing over of the  Science Laboratory Project at Kanifing; book donation to schools in The Gambia; adoption of the  club’s constitution and bye-laws; induction of 10 new members; Inter-city meetings  - (Dakar and Ziquinchorr clubs); special awards and recognition of service to Rotary; increase in Paul Harris Fellows; launching of the Diabetic Foot Care Project; nomination and election of first Gambian District Governor for 2018-19 Rotary year; and approval by the District for the formation of a third club in The Gambia.”

She also said they welcomed and bade farewell to a few people this year, “probably more of the latter than the former, for my liking. But that is a challenge we need to address as a club.  A special farewell was for the late past president Fred Oldfield, and I felt honoured to have led the club at his funeral service. He was a true legend in our club and in Rotary. May his soul rest in peace. Amen!”

She added that they have also committed themselves to recapitalizing their charitable trusts, and to building funds for future sustainable support for the needs of their community.

“This work has just begun, but I feel a corner has been turned, and the corner stone laid.”

She added: “What is really exciting now more than ever is that, we are thinking far more ambitiously about what we can achieve than before. We have a major fund-raising committee designing events that will blow our socks and other accessories off, and raise substantial sum for our ambitious programmes.

“We will be organizing a District Conference in 2019 that no Rotarian will want to miss, and I know that DGN Allen has some great ideas about how we can build towards this event in the years leading to it.”

Rotarian Fatou Bah also said to run a club function effectively, there needs to be a core group of dedicated individuals willing to the 3T’s - TIME, TALENT and TREASURE at no cost.

“We are blessed to have older members whom I like to call wise men. I have found their support valuable, and it is empowering to know that the administration of the club is in great hands.

“The club’s Board of Directors had done a fantastic job this year.  I have enjoyed their support and valued their work with the committees.  I value their wise counseling, and they have done well to curb and mould some of my zealous schemes into better shape during the year now ending.”

She said further: “At the end of my term as the President, allow me to register my sincere gratitude to a multitude of people, the most illustrious, the anonymous, who did so much to bring me their overwhelming support, my employers and co-workers the TBL family, and the Committee  for the Governorship (district 9101); my beloved son, Mohamed Nyabally, my  entire family and friends who have accepted my absence in good faith, and have willingly shared  me with Rotary responsibilities during  these intense moments.  All these people have one way or the other helped to make easy my difficult task of serving the community.

“Dear Rotarians , let me conclude by stating that to hold the Office of President of the Rotary Club is a colossal undertaking, but a worthwhile venture. It is an experience that cannot be truly conveyed in images or words.  It is a wall of flame that will burn forever in my memory, dancing with light, shifting within shadows.

“I wish Rotarian Abdoulie Cham, incoming president, all the best for the year ahead.”