One Gibby Sey was recently arraigned at the Special Criminal Court, charged with robbery with actual violence, a charge he had denied.

According to the particulars of offence, the accused, Gibby Sey, on 10 February 2012, at Sukuta Town, within the jurisdiction of the court, robbed one Ebrima Conteh with a Mercedes Benz and some cash.

He was subsequently remanded at Mile 2 Central Prison and the case was adjourned till 31 May 2012. 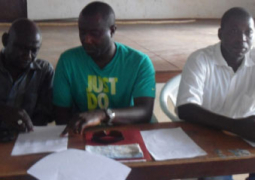