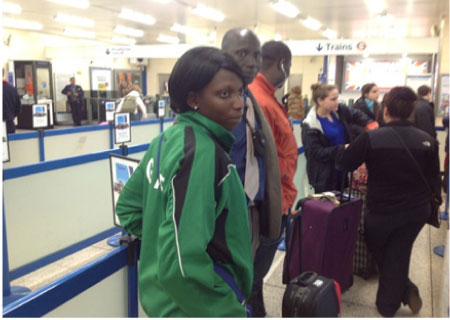 Brufut Marathon female champion Hoja Secka flew back Wednesday fresh from the where she finished among the top ten in the marathon.

The Armed Forces athlete and coach Warrant Officer One, Modou Lamin Jatta, was in the courtesy of the Brufut marathon, whose partnership with Brussels Airlines guarantees that the female champion each year runs in European marathons.

The duo was met at the airport by members of the Brufut Marathon and Brussels Airlines officials.

Meanwhile Hoja could find her title defence come under intense competition from another long distance sensation, Mariama T. Jallow, who just returned from , where she swept gold in 10 km in .

The two, alongside other budding athletes, are heading to Brufut Saturday to compete in the much sought after 21 Km cash and air ticket.

A large field is expected too in the men’s category, which is also being prepared to offer similar prizes.

The organizing committee chairman Ba. S. Jabbie, welcomes all athletes and the public to the 18th edition of the Brufut marathon, saying: “We are, as ever, committed to providing a good terrain for aspiring professional and amateur runners to experience a unique opportunity to fulfill their dreams.”