Joecelia was in the country to meet with movers and shakers of the Gambian music industry.

During her visit, the young female vocalist met with prominent music promoters, musicians and entertainment journalists to discuss a way forward to developing the musical scene of two countries.

Speaking in an interview with The PointEntertainment writer recently at the Alliance Franco restaurant, the foreign musician thanked the people of The Gambia for the warm welcome accorded her and her manager, showering special thanks and commendation to their host and one of the world music promoters Oko Drammeh.

She said their visit to The Gambia was to fraternise the musical industry and artistes of both countries.

Touching on her music career, Joecelia told Entertainment that she started music since she was going to school.

"I take music as my career and I did extremely well by producing hit songs in Sierra Leone, and I learned with a lot of jars," the young music vocalist said, adding: "Music has been in me for a long time."

Since she started music, Joecelia is yet to release any album but has released many singles on the way.

"At the moment, I am putting finishing touches to the first album I want to release," she disclosed, saying The Gambia is a potential ground where musicians can develop their talents.

Oko Drammeh of Music Producer International Festivals thanked Joecelia and her manager for accepting his invitation.

He said the young musican and her manager came to the country to discuss issues on how to solidify the music of both countries.

Oko said further that the star musician and her manager were also invited to nurture good relationship between artistes of both countries, to promote the music of both West African states.

"We will use our artistes to start with it," he said. "My passion is to develop the Gambian and African music."

Her group is expected to come back to perform in The Gambia. 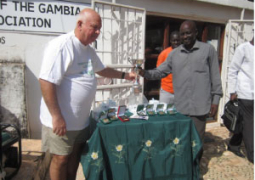