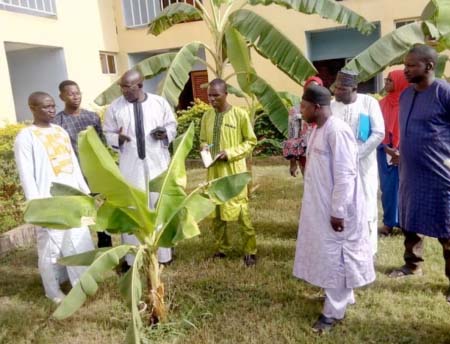 The Committee was taken on a conducted tour of the edifice led by Mr. Jammeh who is also the FIFA Forward 2.0 project manager.

He highlighted the work embarked by the GFF to refurbish the center after it has been fallen to a dilapidated state, saying NTTC has a new look that houses an administrative block, conference room, gymnasium and artificial playing field amongst others.

Expounding on the GFF structure and the NTTC funded by FIFA as Goal Project for the Federation, Mr. Jammeh told the law makers that the GFF has both successes and constraints since the ascension of the Lamin Kaba Bajo-led executive in 2014.

General Secretary of GFF, Lamin M. Jassey thanked the NAM Select-Committee for the visit, saying they are extremely happy and pleased to receive the committee to the GFF National Technical Training Center.

“This visit is significant for the GFF because it will avail us the opportunity to have a first-hand interaction with the NAM regarding our two facilities at both the NTTC and Football Hotel,” Jassey noted.

Similarly, the National Assembly members were taken on a tour of the facilities of the Football Hotel by General Manager Lamin Sanneh.

The Hotel GM also took time to brief the Select Committee on the achievements of the Hotel as conceived by the GFF. He said the hotel is a subsidiary of the GFF describing the initiative as a positive move by the GFF Executive.

Speaking on behalf of the national assembly Select-Committee, its Chairman Hon Alagi S. Darboe noted their impression on the work carried out by the GFF at both the National Technical Training Center and Football Hotel. He described GFF’s successes as a trail blazer and further urged other Associations to emulate Football House.

Hon. Darboe noted that a lot of changes took place at the NTTC since his last visit to the Centre.

“We are impressed with the level of work taken place here. I was here two to three weeks ago with the Honorable Minister and a lot of development have taken place from the rooms, the swimming pool under construction, artificial turf and the technical department. I want to say that we are really impressed with the work done by the GFF and we do hope that this trend continues,” he noted.

The Brikama North Parliamentarian however added that the GFF should be seen as a case study for other Associations to emulate from. “The Football Hotel is a facility that the Gambia should be proud of. I quote it as an example to the Honorable Minister that, the ministry especially the National Sports Council should not only serve as judges in trying to manage or solve crisis but to also sort out ownership and management of the mini stadiums across the country.”