Urban refugee women from the sub-region recently made their plight known to the world on the celebrations marking World Refugee Day, held at Sibanor in the Western Region.

Marian Scott, the female refugee leader, said their group comprised and Liberian refugees as their Sierra Leonean counterparts had already been effected by UNHCR'S cessation clause.

On their constraints, Marian Scott said "we have accommodation and feeding problems".

"We believe grant-in-aid can cover for all these and sustenance. We don't want loan, we cannot pay it back. We want grant", she stated.

She further said that they have been pushing for support, but it's not forthcoming.

"We have requested from the Jammeh Foundation for Peace, Africell, Gamcel, and have sent over thirty letters", she added.

In a brief ceremony, the women removed their tags and presented them to the UNHCR's Protection Officer, Fatou Barry.

Some of the slogans read: "We plead for sustenance's in any form; global financial crisis has increased hunger, please help. Lack of basic needs is leading women and girls into acts of sexual survival. Help urban refugees with food and shelter aids".

Khadissa Sanneh, a Cassamance female refugee head said they had no food to eat, noting that they work for people before they can be able to eat.

"We are suffering, I am suffering greatly. We should not be left behind. We want identity cards and we want international status," she said in an unequivocal term. 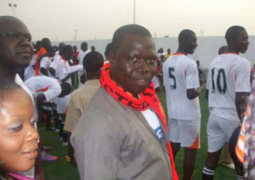