It was reported in this paper yesterday that a six year old boy was killed in a road accident in Kembujeh, Kombo Central. The accident was said to be due to speeding.
At mid-week another fatal accident occurred in the late morning hours at the notorious Banjul Highway/Bund Road intersection by Mile II, where only the most inexplicable accidents usually happen, and at a scary rate. The accident was between two 12- seater vans, one of which was reportedly traveling at neck-breaking speed. According to eyewitnesses, the speed was such that the collisions and fatalities could never have been averted. The drivers in both cases appeared unable to control their vehicles within collision range of each other. Of course both vehicles were badly damaged, one of them crunched beyond recognition, leaving any viewer with the clear belief that no one could have survived the disaster.
It must be pointed out again that these types of accidents are getting too many for tolerance, and public concern is getting very high. These accidents are just galore: if it is not the Banjul- Serrekunda Highway, then it must be the Senegambia stretch of the Coastal Highway anywhere between Traffic Light and Bijilo Junction. The speeding along these roads is just alarming, some of it reckless going to suicidal. Are the police doing something about this?
The police should take due note that the mentioned roads constantly have very heavy traffic, with car owners putting themselves under pressure trying to quickly reach their offices or business places, and trying to beat the traffic by maneuvering and speeding. This happens during the week. At week-ends it is something else; then you have the ecstatic party-goers and rough-riders speeding and overtaking even on the solid lines and bends, putting fear into other drivers and pedestrians, and often crashing.
Pedestrians who cross the road do so at their own risk; 'the harder they come the harder they fall'. We ask, should the police not make zebra crossings across these roads? In this advanced age can the Police not arrange for breathalyzer and blood tests to check alcohol and drugs? When will the problem end? 'Till Doomsday' is not even a fitting answer to this question because doomsday is already with us on our roads; for those who have lost lives, doomsday is already even past.
We appeal therefore to the Inspector General of Police to look into these frequent recurring road accidents, and to provide concrete answers that would save unnecessary loss of lives and put everybody's mind at rest. This would be very well appreciated by members of the public. It may be considered to resort to our good old road signs.You don't see many of these signboards anymore even though they served a useful purpose. They helped to indicate speed limits in the vicinity of towns and other residential areas. Drivers who violate these speeds limits should be made to incur heavy fines, or endorsement, or disqualification. Stiff penalties will serve as a deterrent to speeding.
To complement or back up speed limits, the police should seriously consider mounting regular surveillance over areas where speeding is rampant, and make their presence felt. This should be possible because there are now available many more traffic police men and police women than ever before. The mobile traffic section could also be deployed to the exercise. Regular surveillance would surely further ensure road safety.
This appeal to the IGP is made on behalf of the general public, on account of the terrible disasters we all face on our roads on a recurring basis. It is time we put an end to unnecessary, unwarranted suffering and deaths. The police tend to concentrate these days on the use of seat belts. These trappings are alright. But we should realize that the real danger to life and limb,is not seat belts but speeding. The casualties in those accidents, you may want to know, were in fact wearing seat belts including the driver who died on the spot.  Clearly, the reason they died was speeding, not seat belts. The question of road accidents therefore needs to be looked at again by the relevant authorities, more logically and realistically. Speeding seems to be inflicting more rapid deaths and suffering than all our killer diseases put together. 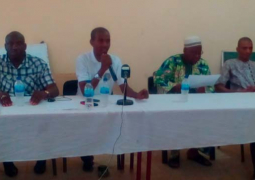