Rangers FC on Wednesday emerged champions of the 2010 Daru-Salaam league following their 9-8 victory over Gunners FC on post-match penalty shootout, after a 1-1 draw in regular time at the Dare-Salaam playground.

The mouthwatering match, characterised by delightful exhibition of skills and panache, attracted huge crowd from Daru-Salaam and its environs.

Kebbi Bojang opened the score line for Rangers FC in the 48th minute of the game before Pabi Kanteh leveled the score in the dying minute.

This pushed the game into a post-match penalty shootout which ended 9-8 in favour of Rangers FC.

As champions, Rangers FC were crowned with a trophy and a cash prize of D2,000, while Gunners FC received D1,500 as runners up.

The kick-off was taken by Foday Jabang, a veteran player of Dabanane FC, who commended Daru-Salaam Sports Committee (DSC) for its tremendous contribution towards the development of sports in the area.

He advised both finalists to maintain discipline and tolerance to realise their dreams and aspirations.

Ball Conge FC, the double finalists of last year’s Serrekunda East Knockout and League Championship, have now sailed to the second round of the competition after collecting nine points in five games while Old Hands FC collected no point in five encounters.

Earlier on Tuesday, 12 October 2010, at the Serrekunda East Mini Stadium, Eden Border FC drew 0-0 with Medina FC leading to both teams qualifying for the second round of the nawetaan competition.

Meanwhile, today, 15 October 2010, will show Juventus FC, who have so far registered six points in four games, clash with Cannon FC, who are yet to taste a defeat since the commencement of the tournament and are presently on ten points in four games.

On Saturday, 16 October 2010, Nguma FC will battle it out with Milan Rossoneri FC in the group C encounter at the Serrekunda East Mini Stadium. 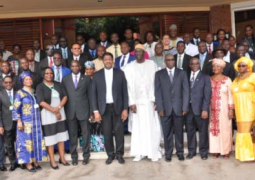