Rangers FC the 2008 double champions of Serrekunda East have added the Supper Cup in their cabinet of trophies after beating TK Snooker 3-2 in the curtain-raiser last Friday 31st July 2009, at the Serrekunda East Mini Stadium.

Marksman Omar Mbye gave rangers the lead just after 5 minutes of kick-off, courtesy of Muhammad Sanyang's swung in cross from the far right of the field.

TK Snooker's fought back and levelled the score through Omar Ndong who capitalised on Rangers FC defensive lapses in the 8th minute of the game.

Both teams failed to capitalise on their chances, leaving the first half 1-1.

As action resumed in the second half of the game, Amadou Keita increased the score line for TK Snooker's FC in the 50th minute.

Rangers FC levelled the score through Omar Mbye again in the 59th minute of the game.

Substituted Sear Mbye sealed the victory for Rangers FC in the 67th minute from a mesmerising strike.

Ebrima Camara of TK Snooker's was voted the best player of the day, and was also given a trophy and a cash price of D500. 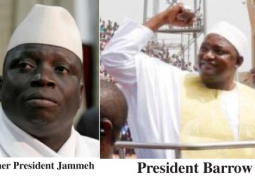