, who were Lamin knock-out champions defeated the league champions, Jattas FC in a well-contested game that show thrilling talents from both sides.

The Academy Boys were confident in keeping the ball on their feet, while Jattas FC were playing long balls, but both sides could not break the deadlock and the first half ended 0-0.

As action resumed in the second period of the game, both teams fought hard and also created numerous scoring chances until in the 68th minute when Landing E. Sanyang was brought down inside Jattas FC eighteen yard box by Alieu Jarju to earned a penalty kick for the Academy Boys. The penalty was taken by Landing E. Sanyang, who opens the score for .

skipper, Sanna Kujabi, was cautioned twice and as a result, was sent off in the 78th minute of the encounter.

Jattas FC also fought back and created a handsome of scoring chances, and as a result, substitute Pa Modou Bah, last minute gasp secured a 1-1 score line at the end of the game.

won the shooting by 3-1. However, in this year's Lamin Nawettan Championship 20 teams will take part and would be grouped into 4, and in each group one team will be relegated. 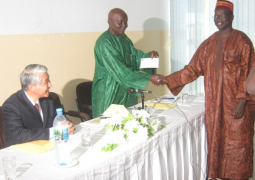