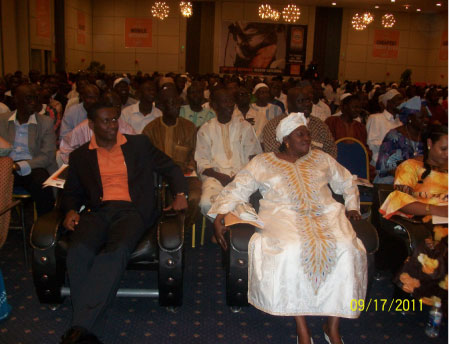 It is a common saying that whenever records are broken, especially a record that will positively affect the lives of people, it’s worthwhile to recognise and celebrate the event of the record-breaking.

This is so, because it will set a new challenge for the rest to try and break the record, and that is what arguably brings about development.

Ever since Qcell Gambia Limited, the country’s only 3G (Third Generation) telecommunications network came into existence, it was a unique beginning.

Its management made a pledge to the people of The Gambia to create, build and expand a Gambian-owned telecommunications service provider that will provide targeted products to all types of businesses in the country; provide excellent returns on customer investment and bring convenient communication services to the doorsteps of each and every individual in this country.

Two years on, Qcell and the Qcell group has proven to be an unmitigated success.

History was made on Saturday 17th September at the Kairaba Beach Hotel, when Qcell held the final of its first-ever nationwide Qcell Spelling Bee competition and award ceremony.

The event, which marked the finale of a whopping D10 million education initiative undertaken by Qcell and the Ministry of Basic and Secondary Education, started in November 2010 involving all senior secondary schools in The Gambia.

Eight out of a total number of 65 senior secondary schools made it to the long-anticipated grand finals, with each participating school going away with a computer, data card, and router among other valuable prices.

The , whose Vice-Chancellor Professor Muhammed O. Kah  graced the ceremony, gave scholarships to the winner and the two runners–up and the only three female students, who made it to the finals.

Speaking on the occasion, Hon. Fatou Lamin Faye, minister of Basic and Secondary Education, who was the guest speaker commended, Muhammed Jah, Chief Executive Officer of Qcell, for complementing the efforts of her ministry in raising the standard of English Language in the school system, through the competition.

“This intervention is, indeed, in line with the Education Policy pronouncement which is aimed at providing quality education for all,” she said.

According to Minister Faye, the government of the has done a lot for the advancement of education in the country, since the revolution in 1994.

“It is, therefore, no coincidence that Muhammed Jah’s company, which is a shining example of this revolution, has initiated such a ground-breaking and laudable initiative to challenge students not only to develop their language skills, but also engender a spirit of healthy competition,” she added.

She told the high-level convergence that for any company aiming at excellence in service delivery, investing in the education sector today, and students in particular, is just like investing in the future of its workforce.

She challenged other private institutions and companies to emulate Qcell in similar undertakings, in order to move the education agenda of this country to higher heights for the benefit of individual companies and the country at large.

Qcell CEO Muhammed Jah in his speech underscored his company’s resolve to always partner with government, especially in the area of youth empowerment.

Jah highlighted, among others, Qcell’s products and services that have been brought to the market, which have added value.

He also urged the students and respective schools to make good use of the opportunity, and continue to work hard for the development of The Gambia.

“Since we came into the market in July 2009, as the first and only 3G network, we’ve never relented on our trademark reputation of being the first in so many different ways,” Anam added.

According to her, Qcell will always innovate and will never relent or compromise on standards. “Part of our motivation as a company is to keep the people of this country abreast of the innovative changes in the world of GSM technology. To that goal, we are firmly committed,” she stated.

In her views, in this day and age, computer knowledge is a necessity and not a choice.

“Our goal is to bring the best of the best to The Gambia, and this D10 million project is a testament to that mission. We want all our senior secondary schools to have internet/computer exposure, and be competitive anywhere in the world,” she noted.

Mrs Jah-jobe commended the ministry of Basic and Secondary Education and all stakeholders for the support, and all their valuable customers for the continued patronage.

Others speakers at the ceremony includeed Cynthia F. Gregg, charge d’affaires at the US Embassy in Banjul, and Professor Muhammed Kah, vice chancellor of the University of The Gambia.

Who will help Lamin Jatta? 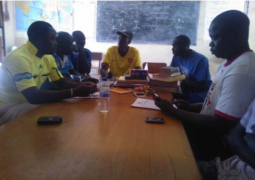