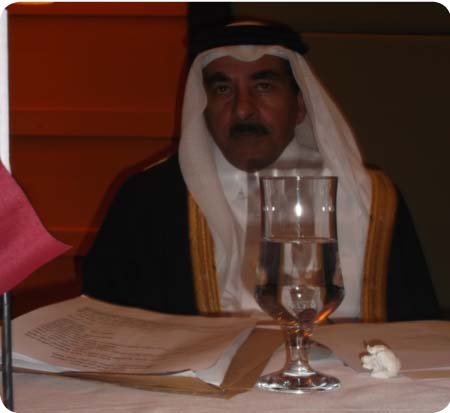 The Qatar government diplomatic representation in The Gambia through its Ambassador, H.E. Mohamed Nasser Al-kaabi on Wednesday observed the country’s 135th National Day.

The celebration held at the Sheraton Hotel in Brufut brought together government officials, Qatar embassy representatives and other foreign diplomats.

In his welcoming remarks, Ambassador Mohamed Nasser Al-kaabi said he was grateful to Allah the Almighty for yet witnessing another wonderful year of celebrating Qatar’s National Day.

“We are celebrating today with our wise leadership a memorable day in our hearts, in commemoration of the founder of our young nation, Sheikh Jasim Bin Mohamed Bin Thani (may his soul rest in perfect peace),” he said.

He noted that this year they marked the day under the able leadership of His Highness Sheikh Tamim Bin Hamad Al Thani, who he said had succeeded his father Sheikh Hamad bin Khalifa Khalifa Al Thani, who also spearheaded the Qatar national developments.

Ambassador Nasser Al-kaabi further revealed that the occasion is being observed annually of the historic day in 1878 when Sheikh Jasim, the founder of the state of Qatar who succeeded his father and ruler of the country, led the nation to unity.

He added that the occasion also ensures their identity and history which embodies the ideals and visionary aspirations the country was founded upon.

The national day he said is an opportunity for them to recognize and celebrate the tremendous efforts made by Qatar’s forefathers who endured severe hardship and paid a dear price for the unity of their nation.

The state of Qatar, according to its ambassador, has attained great achievements which cover all sectors in a short period.

He said that in sport, preparations are in high gear for the successful hosting of the FIFA World Cup in Qatar.

He also noted that 2014 would witness the inaugural ceremony for the opening of Hamad International Airport, which stands as one of the largest airports in the world and will accommodate about fifty million passengers per annum.

He further remarked that in health, the state has established a supreme council of health which aims to provide maximum level of health care and provide preventive health services and therapeutic at all levels, which enjoys international repetition.

The ambassador further paid special tribute to the outstanding bilateral relationship and ties that exist between The Gambia and Qatar in all areas, while showing his pride to work tirelessly to strengthen the relationship in all concerned sectors under the leadership of the two dynamic leaders.

He further extended his gratitude to President Yahya Jammeh, Vice-president Isatou Njie-Saidy and all the cabinet ministers for the warm welcome accorded them.

Speaking on behalf of the Government of The Gambia through the minister of foreign affairs, Tourism Minister Fatou Mas Jobe-Njie underscored the friendship and brotherhood the two nations shared in common.

She said the Governments of The Gambia and Qatar have enjoyed harmonious and cordial relationships based on their shared value, particularly the pursuance of human development, for the respective people of the two nations, especially in an era of global economic reliance.

She told the audience that The Gambia Government has noted the milestone achieved by the state of Qatar in its quest to attain the Millennium of Development Goals for the benefits of the people of the two nations.

She expressed hope that with the collaboration and support of development partners, such as Qatar, the country will be in good standing to achieve all the goals.

Minister Jobe said the Qatar government has valuably contributed to health, education and other social sectors of the nation.

According to her, Qatar government has provided funding for projects that are vital to the social economic development of the country.

Investment groups and companies from Qatar have been visiting The Gambia and have engaged the relevant authorities in exploration opportunities, she noted.

She further extended invitation to investors from Qatar to come and explore the business opportunities in The Gambia, with the guarantee that the country provides one of the vital key conditions for investments.

“The Gambia remains a peaceful and stable country which is experiencing consistent economic growth; our foreign policy of objectives continues to have as one of its key components the maintenance of peace and stability for sustainable development,” she remarked.