PW2 told the court he recognised the accused person and he could recall he and other people arrested the accused.

He stated that on the day in question, one of his friends brought a mobile phone to his house for charging, adding that while he was in his bedroom, the accused entered the house and removed the said mobile phone from the charger.

The accused went out with the mobile phone, he told the court, adding that he was also informed by the kids that someone entered his house and removed the phone from the charger.

“I enquired about the person and they told me the person had just walked out. We followed him, and called his attention but he refused to stop, and started to run,” he explained.

He said they chased him and when the people in front of him stopped him, the accused threw the said mobile phone.

“We picked it up, arrested him, and took him to the police station,” PW2 said. “I then informed the owner who brought the mobile phone to my house, who also met us at the station.”

The witness identified the said mobile phone in court when it was shown to him, and the prosecutor applied to tender the phone.

His application was granted and the phone was admitted in evidence as exhibit.

The case was then adjourned for cross-examination.

GPA out of WAFU club championship 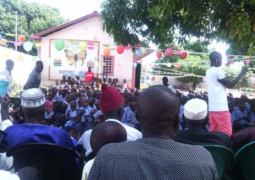