A clear, pin-pointed objective is what will propel us towards well-defined goals. When they are loose and ill-defined be sure we will lose focus or sidestep them through no deliberate fault of ours. The reason is that the absence of goals, which serve as stepping stones and signposts, to get there faster will end up deterring our very movement or will succeed only in bogging us down.

Focus is an essential ingredient in setting our priorities otherwise we get distracted and we begin to put emphasis on what is insignificant. We dwell on trivialities rather than on what really matters. Focussed light through a sheet of glass can produce enough energy to set paper ablaze. This is the kind of focus we need to back our goals so that we can never lose sight of them.

How much effort really is needed, if not sufficient drive and motivation? The strength to remain steadfast would make a lot of difference. This was the case with Zacchaeus who started off with a handicap. He was short in stature and very unpopular because he worked for the colonial master as chief tax-collector, that is to say, a custom’s officer, reputed for short-circuiting the system.

Zacchaeus no doubt must have heard about a much-talked about character named Jesus and he was bent on just getting a glance of him. “He wanted to see who Jesus was.” (Luke 19:3) He was curious to see whether what he had heard would match what he would see. He was on an evaluation exercise. What did he do? His disadvantage was not of any great help. Everywhere Jesus went he pulled such a large crowd that Zacchaeus envisaged having a problem positioning himself in the crowd because of his height. He had no guarantee that he could catch a glance of Jesus. To be certain, he climbed on a tree, just where Jesus was bound to pass. “So he ran ahead and climbed a sycamore-fig tree to see him, since Jesus was coming that way.” (Luke 19:4)

Was his objective attained? Just as Jesus reached the spot where Zacchaeus had perched, the latter was taken by surprise. He heard someone call his name: “Zacchaeus, come down immediately. I must stay in your house today.” (Luke 19:5) Zacchaeus got more than he had bargained for. He must have been pleasantly stunned not only to have been called by name, but also to have been privileged to spend time with Jesus, nowhere else but in his (Zacchaeus) very abode. His curiosity paid off dividends.

The outcome of predetermined and focussed goals could be unexpected and crowned with immeasurable benefits. In life, we must be bold and daring enough in fixing our goals, by braving it through all the obstacles. All Zacchaeus wanted was a snapshot of Jesus at close range. That was his objective - nothing else.

Another biblical character that had a clear objective was a well-to-do Shunem woman. Her compassion for a prophet who frequently passed by her house led her to finally meet with him. She furthermore offered him shelter in her own premises. “Let’s make a small room on the roof and put in it a bed and a table, a chair and a lamp for him. Then he can stay there whenever he comes to us,” she told her husband. (2 Kings 4:10) This lady embarrassed the prophet with much attention that one day the prophet thought he should reciprocate her kindness. “You have gone to all this trouble for us. Now what can be done for you?” (2 kings 4:13) After concerting with his servant Gehazi, the prophet enquired: “What can be done for her?” (verse 14) His servant responded that the lady had no son and her husband was old. So he sent for her and the prophet blessed her. “About this time next year you will hold a son in your arms.” (2 Kings 4: 16)

God confirmed Prophet Elijah’s prophecy and the following year the Shunem woman bo`re a son, to her great delight. However prior to getting pregnant, she had cautioned the prophet not to mislead her. (2 Kings 4:16) Unfortunately, the child took ill one day and passed away after a severe headache. “My head! My head!” he cried in agony. He was rushed to her mother but not long after he died.

Something rather strange happened afterwards. There was neither wailing nor sobbing. The Shunamite lady “… went up and laid him (the corpse) on the bed of the man of God, then shut the door and went out.” (2 Kings ) Then she asked her husband to oblige a servant with a donkey “so I can go to the man of God quickly and return.” (2 Kings 4:22) To all other questions she replied: “It’s all right.”(verse 23) Her destination was Mount Carmel where she went in search of the man of God. When the man of God saw her coming, he sensed something serious ought to have happened.

The prophet asked his servant, Gehazi, to go and meet the lady halfway in order to find out what happened. Her answer was still that everything was all right.(verse 26) When she got to the level of the prophet she burst out in distress. “Did I ask you for a son, my lord? Didn’t I tell you not to raise my hopes?” (2 kings 4:28) Thereafter the problem became that of the prophet. He admitted God had hidden this event from him by not giving him any clue whatsoever.

The prophet gave instructions to his servant to rush to the site to render primary care. The lady declared in no uncertain terms. “As surely as the Lord lives and as you live, I will not leave you.” (verse 30) In other words, he was saying; until something positive happens, until life is brought back to my son I will not move an inch from here. The prophet went to work where the boy was laid and he was brought back to life. “Elisha called Gehazi and said, ‘Call the Shunamite woman’ and he did. When she came, he said, “Take your son.” She came in, fell at his feet and bowed to the ground. Then she took her son and went out.”(verse 36)

To sum it all up, the Shunamite lady did not mince words. She had not nursed the thought of being mother to a son; it was the prophet’s idea. There was no better place to dump the kid than on the prophet’s bed so he could deal with the case. Man of God, do something as long as you give me back my child alive. Purpose!

Ever heard of the Syrophoenician woman? Jesus was in the vicinity of and wanted to stay anonymous when; “A woman whose little daughter was possessed by an evil spirit came and fell at his feet. She was Greek, but was a Syrian Phoenician.” (Mark 7:25-26) She wanted her daughter cured of this disease by all means and begged Jesus to intervene.  Jesus’ response “…for it is not right to take the children’s bread and toss it to their dogs” did not make her raise an eyelid. She retorted that she could make do with crumbs; “… but even the dogs under the table eat the children’s crumbs.” (Mark 7:28) She was bent on receiving healing for her daughter, come rain come shine. Her unwavering position changed Jesus’ mind. He told her; “… for such a reply, you may go; the demon has left your daughter.”(verse 29)

Mothers have a nudging way of bringing pressure to bear and getting results. The Shunamite and the Greek ladies did just that. Their needs were met because they had a clear-cut objective. Would you pursue yours to the very end? 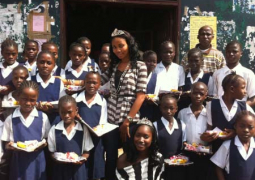