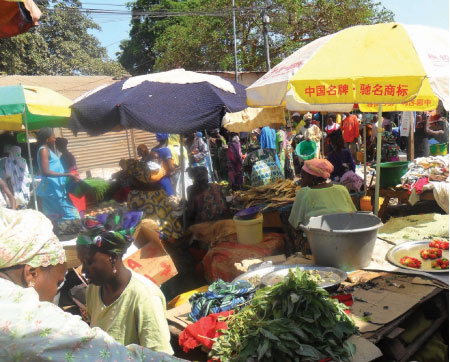 There have been mixed public reactions at the current state of escalation of prices of basic commodities in the country, a situation that makes one to sit up with profound concern.

The issue, according to businessmen and women we spoke to yesterday, on the current market standards and prices of essential commodities in the country, has implications for the majority of the citizens, especially those receiving a minimum monthly salary.

Many business people whom we spoke to called for reduction of tariff duties on goods. They said high tariffs and taxes are responsible of the recent hike in prices of commodities.

Some people have also acknowledged the difficulties they are facing, regarding the prices of the necessities of life.

In the view of one Mariama Badjie, many people if not all depend on rice as the staple food in The Gambia, hence having it at that high price is difficult to afford. She also maintained that fuel is used every day, especially those who depend on it as a source of energy for light.

"We in the rural areas use generators for energy to watch television, films as well as to charge our mobile phones.

"So if the price of fuel is so high, some will not be able to afford it, and eventually cannot have access to these facilities.

In her opinion, the government must not be blamed for the increase of prices on commodities. "We have nothing to blame the government for. It is the people themselves who sell and buy the same commodities," she said.

"The government has the power to decide and enforce. So why can't they react to this frustrating situation and save each and every Gambian from this terrible situation? They should make subsidies for tax payers, especially those in business and give it to them to help reduce prices," said one Ousainou Camara of Serrekunda market.

This, he added, if done will see a drastic reduction in the prices of basic commodities.

One Binta Njie of Tallinding market said the people have themselves to blame for the increase in the prices of commodities.

"I believe the answer to the current increase in the prices of commodities is simple. We only have ourselves to blame. We grow rice, tomatoes, garden eggs, among others, here in The Gambia and yet their prices are expensive," she said, adding that unless we are committed and ready to work hard, life will be difficult for each and everyone.

Some say the cost of importation and the prices of imported commodities have zoomed at the international market, mainly due to the increase in price of petroleum or fuel.
Some local petty traders are of the view that one of the reasons for the rapid increase in prices is that the value of the dalasi has started to dwindle, and the parallel market of currencies has started rearing its ugly head again in the system.
Yet others contend that a monopoly kind of importing goods into the country by influential businessmen and women is in full force, creating the advantage for such importers to manipulate prices of commodities that they alone import into the country.
Some of the traders and consumers are, therefore, calling on the government to intervene and implement a price control mechanism, in order to arrest the speed at which prices of essential food commodities are increasing in the country.
"We don't want the situation that prevailed in this country in the recent past, when prices of goods and services were skyrocketing like no man's business to recur in this country," said one Yamoundow Ceesay, a desperate consumer at the Serekunda market.
"We would like the relevant authorities to put in a price control mechanism so that the situation is put on check."

Alieu Ceesay, a business man at the Serrekunda market, said: "I started my business sixteen years ago and comparing two years ago to 2011, things are the same as far as my business is concerned. When development is taking place in any country, the business sector also needs to develop in terms of their business, but for me, two years ago is the same as this year, and I see no difference.

Amie Manneh and Mariama Gibba, both businesswomen at Lamin market said: "It is hard for us to make a profit in our businesses, as business is now stagnant in this country. People are not buying due to what they say is the prices of the commodities."