The National Security Council (NSC) has assured the new GPU executive that investigations into the grisly murder almost four years ago of Deyda Hydara, former Managing Editor of The Point newspaper, is ongoing. The Vice President, the number two citizen of the country, made this statement to the Gambia Press Union executive recently at a NSC-GPU meeting at her office.

When the cruel murder occurred in 2004, calls for speedy investigations and subsequent justice had been vociferous. There were even suggestions for the government to let in independent international investigators, owing to the peculiar nature of the difficulties said to have been besetting the investigation efforts. There were claims by the government that co-operation from members of the public would be essential to the success of the conclusion of the investigation but, to all intents and purposes, such co-operation had not been forthcoming from either a too horrified or jittery public.

It stands to reason that where voluntary witnesses from the public failed to come forth for whatever reason, probably the most potent lead to the suspects necessarily had to be forensic evidence garnered from the materials collected in relation to the murder. Therefore if the needed expertise or facility is not available within the Gambian criminal investigative set-up, it makes every sense for international investigators to be allowed to come in so as to do bring the vexed issue to conclusion. Such a step could have added on to whatever credit government might have gained in the efforts and it could very well have been the definitive solution to the lingering matter.

We therefore call on the government to do its utmost to finalise the investigation in the interest of justice. 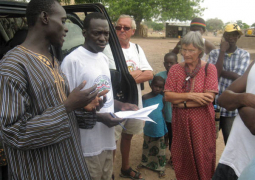