The prosecution Monday closed their case in the Babylon trial involving Lamin B. Jarjue and 13 others before Magistrate Dayoh Small of the Brikama Magistrates’ Court.

When the case was called, the prosecuting officer, Chief Inspector Camara, told the court that he was applying to close his case.

At that juncture, the case was adjourned till 10 April 2014, for defence.

Meanwhile, the trial involving Lamin B. Jarju and Momodou Lamin Jassey, charged with obstructing the Police, Monday proceeded before Principal Magistrate Dayoh Small of the Brikama Magistrates’ Court with the testimony of the third prosecution witness (PW3).

In his testimony, ASP Lamin Cham said he knew one Nuha Jammeh of Makumbaya village and recalled that on 7 March 2013, he was the station officer of New Yundum Police Station.

He said Nuha Jammeh came along with one Abdou Sarr, complaining that he found some people working on their farm, constructing and cutting down cashew trees.

ASP Cham said he asked Nuha if he truly owned the land in question and Nuha produced a certificate and it was an authentic one, adding that the complaint was booked in the registration diary and he later left for the place with six of his men including the complainant.

He said on their arrival, he found about 20 men working on the said land and he asked the men to leave the land but they refused and said Lamin B. Jarjue was the one that assigned them to work on the land.

ASP Cham said he arrested them and went with them to Lamin B. Jarju’s compound but the accused said his men were not going and he was not going either.

He said he then called his commissioner and asked him for reinforcement in order to arrest Lamin B. Jarju, adding that when the reinforcement came they arrested Jarju and he made his statement.

Under cross-examination, defence counsel BS Touray asked ASP Cham whether his departure and return were recorded in his statement, and the witness replied in the affirmative.

As to who was the complainant in the case, the witness said it was the IGP.

Counsel then applied for the diary of action for the purpose of simplicity and the application was granted.

He said Lamin B. Jarju was taken to Yundum station on board his own vehicle.

He confirmed the diary of action, and counsel applied to tender it but was objected by the prosecutor, who argued that the document in question was extracted from the station diary and it was assigned to a relief commander who prepared the document and knew little or nothing about the case file.

The magistrate however admitted and marked it as exhibit and said the weight to be attached to it would be determined at the end of the trial.

He said he served the police for 30 years, adding that Lamin Jarju was arrested along with others.

He said the place he visited was called Babylon and Lamin Jarju hails from Makumbaya village. 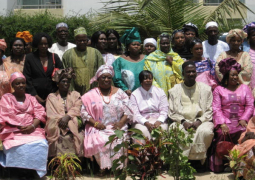