The Gambia Press Union (GPU) has initiated a competitive programme for journalists in The Gambia that is out to spur the practice of good and outstanding journalism in the country.

Its aim is to honour courageous and hardworking journalists whose work influences positive transformations in the country, while enhancing the journalism profession.

This, we must say, is a step forward to encouraging responsible, good and professional journalism in The Gambia hence deserves support from all strata of society within and outside the country.

From the era of the previous to the present GPU executives a lot of growth and new developments have taken place in the media fraternity in The Gambia.

The Games Project initiated about six years ago to train journalists, the introduction of a journalism awards scheme, the recent validation and adoption of a code of conduct and media guidelines for reporting on gender-based violence, and a bouquet of other media training programmes being conducted, have gone a long wayin honing the skills of journalists in The Gambia.

The journalism awards dinner scheduledto take placetomorrow28 May 2016 at the Djembe Hotel in Senegambia is a testamentthat the GPU is treading theright directionin transformingthe level of Gambianjournalism,and mouldingcohorts of fine and professional journalists that wouldplay a pivotal role in buildingthe Gambian nation and shaping its history for onward progress anddevelopment.

We would like to commend the GPU executives, past and present, for their relentless strides, despite the odds, in leavingno stone unturned, in bravely tackling obstacles and challenges in fighting the cause of journalists in the country, and in trying to achievegood, responsible and professionalreporting of social, political and economic issues of the country.

It is a fact that good journalism requires hard work and commitment, hence such programmes as the National Journalism Awards would spur journalists to go the extra mile in producing good reports in the exercise of their duties.

CNN senior White House correspondent Wolf Blitzer once remarked on what is good journalism. He says: “Serious journalism is very hard work and extremely competitive and is certainly not made for everyone, but for those who catch the bug….”

So promoting serious journalism in any fashion is worth commending. Therefore, keep it up GPU! We are with you in as much as you are behind us.

"Read, read and read, and your writing gets better and better with more knowledge and information to be derived from it by the readership." 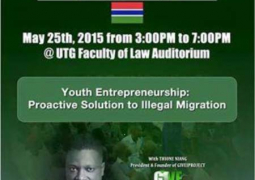