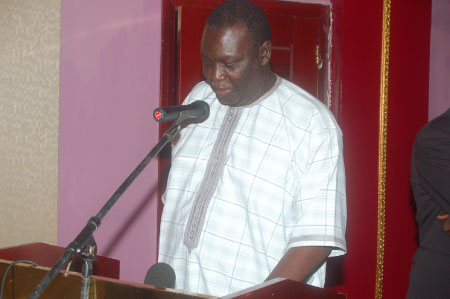 Pap Saine is the Managing Director and Co-publisher of The Point Newspaper, Dean of Reuters Correspondent for West and Central Africa, and Life Honorary President of The Gambia Sports Journalists Association.

Born 4 October 1950, Mr. Saine started his career in 1970 with Radio Syd, where he covered sport in both English and Wolof.

In the same year, he joined the team of commentators of Radio Gambia and up to date, Pap comments on sport for the national radio.

Mr. Saine also used to contribute in the sports programmes of West Coast whenever The Gambia plays international matches.

From 1975 to 1994, Mr. Saine used to accompany the National Team by covering their overseas matches for the Gambian media and served as media officer for the Gambia Football Association, a job that he was doing voluntarily.

Mr. Saine also used to cover Olympic Games. In 1999, he received an award from the National Olympic Committee. From 1998 to 2004, Pap served as President of The Gambia Sports Journalists Association.

He also served as a member of the Press Committee of the Confederation of African Football (CAF) from 1988 to 2002.

From 1997 to 2002, he served as a member of Sports Intelligence Unit based in Denmark.

From 2004 to date, he has been serving as Life Honorary President of The Gambia Sports Journalists Association.

He has also won two international awards, in 2006 in Germany by the Johann-Philipp-Palm Prize and in 2010 by the International Press Institute (IPI) based in Vienna, Austria.