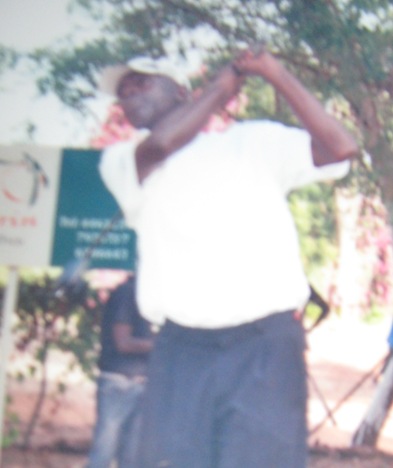 Pa Famara Jatta, better known as JJ, is a professional golfer with the Gambia Golf Association.

Born and brought up in Bakau Jatta Kunda, Pa Famara attended Bakau Primary School where he sat for the BFS leaving certificate.

Jatta, 43, is one of the oldest professional golf players in The Gambia. His golf career has never affected his role as a night security officer.

After leaving the game for ten years he decided to take into sport again and became the head coach of the Gambia Golf Association (GGA) golf academy.

JJ, as he is widely called, started golf as a caddy and played for about three years in the Fajara golf course where he won many caddy competitions.

Following his decision to turn his back to the game, he was cajoled by friends to come back and play golf.  He turned a professional golfer in 2007 through the GGA’s recommendation at his comeback.

According to him, his return was motivated by the caddies and Alagie Drammeh, captain of the GGA.

Pa Famara, as many other sportsmen and women in the country, faces a lot of challenges such as sponsorship. He said his main challenge is sponsorship because golf is all about having sponsors.

“Another challenging part is that I am a security and sometimes from work I come straight to the course to play a competition which is good for me, but in two months’ time I will sacrifice the security job for golf,” said the experienced golfer.

Jatta, like his colleagues, is proud to be a professional golfer for The Gambia because, according to him, Senegal learned from them and the fact that they are their champions.

Pa Famara, as any other sports personalities, wants to leave a legacy behind after his tenure of playing golf. Part of his desire is to become a golf coach the foundation of which he has already started with the Gambia Golf Academy.

He is married with five kids and has gained a lot in golf such as the exposure and participation in international competitions as well as meeting other professional golfers from different countries.

JJ, who was lucky to have most of his golf lessons from five British professional golfers on different areas of golf, also advised upcoming golfers to continue to play golf. He said they should know that golf does not need stress. Golf is like any other sport and it is a matter of win and loss.