In a bid to promote education in The Gambia, Scandinavian philanthropists on Saturday 12th December 2009 made a handsome donation to in Brufut.

The donated items included T-shirts, 90 towels, toys, blackboards, schoolbags, computers, school desk and bicycles for students who live far away from the school.

Speaking at the presentation ceremony, Mariama Baldeh, the Principal of the school disclosed that the school has been benefiting from the Scandanavian support over the years.

According to her, the support among others include, feeding programme and the provision of textbooks. She revealed that the donors contribute towards the construction of the highway to the school, which she added, is of paramount importance to the school. She urged the government to extend their goodwill gesture to her school.

For his part, Mrs. Jo Ann Hatting, a representative of the donors from said the items were given to the school to help promote education in The Gambia.

She stated that this is the first phase of the programme and there are many more in the pipeline. She also commended her partners for their immense contribution, urging the students to make the best use of the donated items.

Speaking on behalf of the Regional Director for Region Two, Mr. Faraba Joof, Cluster Monitoring Officer underscored the significance of the gesture, noting that it would go a long way towards helping the school.

Among the speakers was Mr. Andrew Sylva. 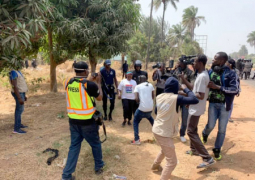 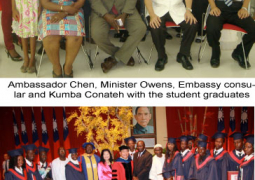