Kekuta Manneh might be one more step towards gaining promotion to The Gambia's most successful and celebrated national team the U-17 at the age of just 15-years, which has been his main objective. But Kekuta Maneh is arguably the hottest prospect in Bakau youth football as manifested by the outstanding performances in the recently concluded Nawettan in Bakau.

His dazzling skills, quick movement, and some wonderful scoring ability, coupled with some spectacular individual brilliance has earned the youngster the admiration of many coaches in Bakau and other footballing areas.

Kekuta is a rare talents in the country's football, and Bakau in particular scoring six goals in his first full season with Vidar in the summer championship becoming the second top scorer in the just ended Nawettan. But it is only a single goal that separated him and the top scorer Lamin Fofana who was crowned the top scorer award after netting 7. He eventually received his first call-up to the Bakau Zonal team shortly his outstanding performances for Vidar, but the star could not help his side to any championship success, despite guiding them to the knockout final where they were beaten by Ron-Mango.

The former Bakau Lower Basic,Upper Basic School and Masca Senior Secondary School graduate began his career in the streets of Madiba Kunda at a tender age, where he was also part of the youth team called Kahn FC. He went ahead to play an influential role as Kahn won the Nooran trophy on two occasions.

He was later given the green light to join Gilkock Football Academy under the guidance of former Steve Biko and Scorpions Midfield Kingpin Abdoulie Bojang, whom he said has served as a source of inspiration in his efforts to realise his ambition of playing in a more recognised competitions like the Zonal cup competition where he played twice in Bakau's games against Gunjur and incomplete Zonal final against Serrekunda East, which resulted in the abandonment of the highly anticipated Zonal final, due to violence surrounding the final at the Serrekunda East-Mini-Stadium.

He is part of many youngsters currently trying their luck with the Bakau giants Steve Biko that finished second in the country's top flight football last season. 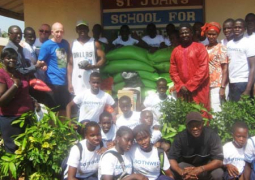 Message from Ms Irina Bokova, Director-General of UNESCO on the occasion of the first International Day of the Girl Child, 11 October 2012