The Minister of Finance and Economic Affairs, Mr. Abdou Kolley has stated that the cost of national identification documents, including passport, driver’s licence and number plates will effect from January 2010 increase as follows: Drivers licence from D300 to D500; provision learner’s licence from D50 to D100; international drivers licence from D500 to D1, 000; passport from D500 to D1000; and personalised number plates from D2500 to D5000. Hon. Kolley was speaking last Friday during the 2010 Budget Speech at the National Assembly.

"The Gambian economy had performed well in 2009 than previously projected, witnessing a second consecutive year of strong growth in agriculture, largely because of good rains and the successful expansion of rice farming," he said. This, he noted, has helped to offset the negative impacts of the global financial crisis, particularly on the rural poor.

Minister Kolley, who described the 2010 Budget as a budget based on a sound macroeconomic policy framework to support growth, maintain low inflation and improve debt sustainability, said it represents a decisive step by the government to tackle The Gambia's heavy debt burden, in particular, the interest payments on domestic debt.

"The budget aims to reduce debt and create saving that could become an important resource for other non-interest expenditures. Total revenue and grants is expected to increase from the its budget of D4.582bn in 2009 to D5.474b in 2010," he added. He said this increase is driven mainly by "increase in tax revenues, project grants and budget support."

"The budget deficit for 2010 is projected at D298.7 million, representing 1.39% of GDP, which will be fully financed through domestic and external resources. While the net- external financing is estimated at D354.7 million, the net domestic financing, which includes repayment of arrears and domestic loans is in the sum of D120 million," he said.

Finance Minister added that Tourism and residential constructions have taken a hard hit.

"A sharp drop in remittances from Gambians in Diaspora greatly limited financing for homebuilding and purchase," he said.

He maintained that the services sector remains fairly buoyant, as all services activities registered growth with the exception of tourism, which he said, registered a decline of about 25% as at September 2009. Distributive trade, he added, is projected to grow by 6%, finance and insurance services by 11%, transport, storage, and communication, by 5%.

For 2010 fiscal development, Minister Kolley indicated "total revenue and grants is expected to increase from its budget of D4.582 billion to an actual of D4.665 billion."

"Grants disbursement in 2009 is projected at D673 million, which is also lower than the budgeted figure of D811 million. The was privileged to receive a budget support from the World and African Development Banks in the sum of D390 million," he stated.

"Total expenditure and net lending is revised downwards from a budget figure of D5.363 billion to D5.027 billion. Interest payment on domestic debt is revised downward from an estimate of D845 million to D799 million by end December 2009, while personnel emoluments, other charges and capital expenditure are projected to be higher than expected from an approved estimates of D1.492 billion to D724 million," he added.

He said the budget deficit for 2009 is projected at D363m with a deficit in the basic balance, equivalent to D312m, noting that the budget is expected to be fully financed with net external borrowing of D121m, net domestic borrowing of D242m and privatisation proceeds of D9m.

On Balance of Payment (BOP), he continued that "preliminary estimate for the first half of 2009 indicated that the overall deficit narrowed to D348.8 million from D376.5 million same period last year. The current account recorded a surplus of D163.5 million during the period, compared to a deficit of D276.1 million. The capital and financial account balance worsen to a deficit of D511.9 million from a deficit D100.4 million reflects the decline in reinvested earnings and equity capital."

In conclusion, he said "The zero-rating of sales tax on rice in 2008 to minimise the impact of the food crises on the poor people and the implicit subsidy on the price of oil by leaving the pump price unchanged, when international prices were rising, where policy measures that resulted in revenue losses equivalent to 2 percent of GDP."  These developments, he added, coupled with the financial and economic crises that ensued have made 2008 a very difficult year.

"In 2009, however, the Gambian economy performed better than expected because of strong growth in agriculture.

"In spite of the positive growth registered in 2009, The Gambia still faces a heavy debt burden. Interest on government debt is expected to consume nearly 20% of government revenues in 2009, mostly in interest on domestic debt.

"This is why in the 2010 budget, government intends to lower the domestic debt, ease pressure on Treasury Bill yields, generate savings from lower interest payments and strengthen public financial management. Achieving these goals call for strict discipline in budget execution. This is a challenge we face as a country with limited resources," he concluded. 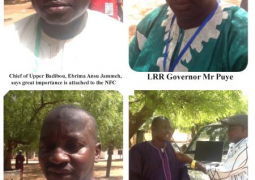