Press release:Training Gambian Security Forces on Freedom of Expression and safety of journalists

From June 5-10 2017 in Banjul, the Gambia, ARTICLE 19 West Africa will organize, with the support of UNESCO and the European Union, two three days training for Gambian security forces on freedom of expression and the safety of journalists.

This initiative is part of the project “Journalism and Media” of the EU’s Governance Programme, launched in October 2016 and contributing with 691,583 euro (approximately equivalent to 35 million dalasi) to media reform in The Gambia. The overall objective of this project, implemented by UNESCO, is to contribute to better democratic governance in the Gambia through improving freedom of the press and the quality of information available to the population. The initiative is part of a wider Governance Programme of 10 million euro (approximately equivalent to 500 million dalasi) financed by the European Union in the Gambia, which includes several components such as: (i) Access to Justice and Legal Education, (ii) Journalism and Media, and (iii) Public Financial Management.

The training is also part of a holistic protection programme for journalists and Human Rights Defenders that ARTICLE 19 is specifically engaged in since 2007.

The objectives of the training is to improve the capacities of security forces in the Gambia to guarantee freedom of expression and the safety of journalists in the context of the implementation of the UN Plan of Action on The Safety of Journalists and the Issue of Impunity, coordinated by UNESCO and endorsed in April 2012 by the Chief Executive Board of all the UN bodies, the highest level coordination mechanism of the UN system. The workshop will promote an enabling environment for freedom of expression, press freedom and the safety of journalists including media pluralism and participation. The project also aims to strengthen cooperation in the field of training security forces to uphold the right to freedom of citizens, to better understand the role and function of journalists in democratic societies and establish professional working relationships with between these two groups.

This project is implemented in the framework of UNESCO’s International Programme for the Development of Communication (IPDC).  The IPDC is the only multilateral forum in the UN system designed to mobilize the international community to discuss and promote media development in developing countries. For any information: 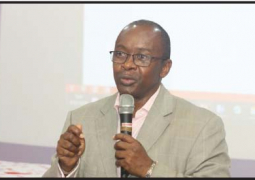 Statement by Justice Cherno Sulayman Jallow QC, Justice of the Supreme Court of The Gambia and Chairman of the Constitutional Review Commission