President Yahya Jammeh has given high priority to traditional medicine as he called for its full acceptance and integration into the health delivery system of The Gambia.

In his keynote address at the weekend, while presiding over the first-ever celebrations of the National Traditional Medicine Day at the July 22nd Square in Banjul, President Yahya Jammeh said The Gambia would “fully accept and integrate traditional medicines” into the country’s health delivery system.

The president also called on the Ministry of Health to work closely with the Traditional Healers Association (TRAHAS) and monitor the activities of traditional healers so as to track down and terminate the services of those deceiving people with fake and ineffective medicines.

The occasion marked the eighth anniversary of the herbal breakthrough medical treatment of President Jammeh, known as the President’s Alternative Medical Treatment Programme (PAMTP), through which many people in The Gambia and beyond have received treatment and cure for diseases such as HIV/AIDS, infertility, hypertension, asthma and other illnesses.

President Jammeh cautioned health workers and private health facilities to guard against putting monetary gains before human life in the discharge of their treatment and other services to human kind.

“As human beings don’t put monetary gains before human life; fear God. It is disheartening to see that even in modern industrialised medicine or modern medical facilities, people put money before human life. There are medical institutions in this country where patients would only be treated when they pay upfront for the cost of the treatment. This is very inhumane and unethical,” the President said.

“Founders of modern medicine and hospitals or clinics put human life first before any monetary gains. Why is it that today there are some clinics in The Gambia where a patient in critical condition would not be treated unless 50 per cent of the cost of treatment is paid,” President Jammeh remarked.

He continued: “We will put up legislations that will make sure that people in critical conditions are not exploited. Gambians should desist from such practices.”

In his remarks on the occasion, the Minister of Health and Social Welfare, Omar Sey, said President Jammeh adopted a resolution in 2014 to promote and integrate traditional medicines into the health system of The Gambia.

This move, he said further, was undertaken in fulfillment of the World Health Assembly Resolution 31.33 which emphasises the importance and benefits of traditional medicines.

The government is taking serious steps to get the Primary Health Care system well into the system through giving correct guide and enlightenment to traditional health practitioners.

“Every innovation is bound to be elicited, but the President’s Alternative Treatment Programme has continued to flourish despite criticism from skeptics who are unwilling to open their minds and embrace alternative approach to medicine,” said the director general of PAMTP, Dr Tamsir Mbowe, who has been working with the President over years to administer treatment to people from far and wide.

A renowned gynecologist and former Health minister, Dr Mbowe added: “It [the treatment] has now been expanded and included in mainstream medical and health programmes, working with the Ministry of Health at various levels.”

Dr Mbowe is also proprietor of Mbowen Clinic in Kanifing.

The august occasion was attended by government officials, the diplomatic and consular corps, and people from all walks of life. It ended up with a rapture of musical jamboree and other entertainment slides. 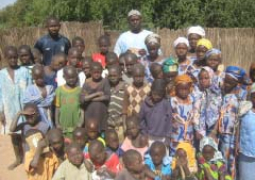