In a related development, Mr. Alieu Mboge, who was the Interim Chairman of Banjul City Council, has been appointed as Director General Gambia Tourism Authority (GTA), replacing Mr. Kaliba Senghore who is now Permanent Secretary at the Department of State for Tourism and Culture.

Dr. Amadou Sowe, Permanent Secretary at the Department of State for Agriculture, has been removed and replaced by Mr. Bakary Trawally, who was Head of Pest Management Unit at Yundum.

Ms. Fatim Badjie, 24, is 's youngest cabinet minister. She was the Senior Communications Officer at Comium GSM Company. Daughter to , 's High Commissioner to , she studied Mass Communication at , graduating with a Bachelors degree.

Dr. Omar Alieu Touray, 43, a native of Farafenni, holds both a Masters and PhD degrees in International Relations. He was first recruited into the civil service as Senior Assistant Secretary at the then Ministry of External Affairs in 1995.

Author of several books, including The and the World (2000) Dr. Touray served at the Gambian Mission to and the European Union during the period between 1995 and 2002. He had also served as Ambassador of The Gambia to and as Permanent Representative of The Gambia to the African Union and High Commissioner to and .

In September 2007, he was nominated Ambassador and Permanent Representative of The Gambia to United Nations in . Married to a fellow diplomat with three children, Dr. Touray is fluent in English, Arabic and French.

Mrs. Nancy Njie, 42, completed her studies at the before joining the then Gambia Airways between 1984 to 1991, setting up her own business afterwards. 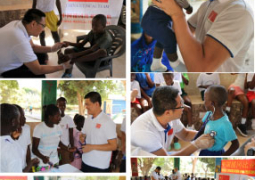