President Barrow: The Gambia’s all we got, let’s preserve the peace 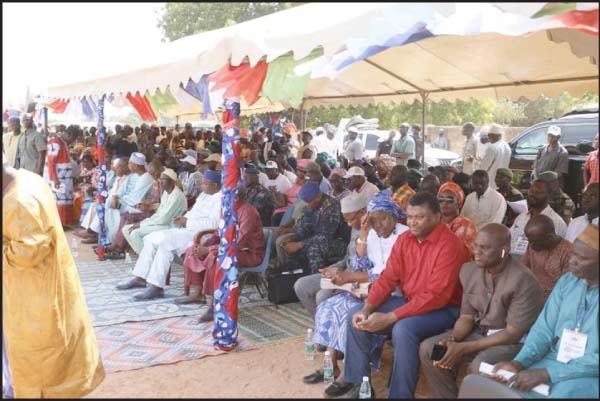 Basse, Upper River Region, 23rd November 2019 - Speaking to a tumultuous crowd in Sabach  Sanjal, President Adama Barrow has called on Gambians of all creed and colours to be relentless in their pursuit of peace and stability in the country.

“As Gambians, we have nowhere else but The Gambia - our homeland. So to promote and preserve peace in the country is a sacred duty of all citizens”, President Barrow said while calling on all his supporters to remain civil and non-violent at all times.

He stated that the goodwill and support that the country enjoys from international partners will be cut short if signs of instability rears its ugly head in the country.

Explaining that the nationwide tour is a constitutional requirement, the president pointed out that he was not there for politics; rather hear and dialogue with the people about the impact of his development policies. In that line, he announced numerous development projects that Sabach”, is billed to benefit from such as the nationwide 400KM road project being rolled out.

As early as next year, he added, the community will also be part of at least 12 villages that will  be connected to the national electricity grid.

Stressing that he’s not into the business of giving empty political promises, the President  highlighted the growing economy, booming trade transactions, the restoration of the energy  supply, among others are examples.

Re-echoing similar sentiments, the Chief of Sabach Sanjal, called on his community to ignore people he described as “elements of division and destruction based in the Diaspora”. He said such people stoking instability have the means to protect their kids and kin when the majority is vulnerable.

He also announced that all the 57 Alkalolu of the district have signed a declaration of support for  the Barrow government agenda.