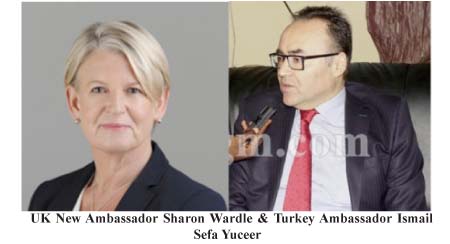 President Barrow told all three envoys that The Gambia was open to all nations, and it sought friendship and cordial relations with all countries. He said he expected The Gambia’s relations with other nations to enhance cooperation for the socio-economic development of The Gambia and those countries.

Presenting his credentials, Ambassador Ismail Sefa Yuceer of Turkey assured President Barrow that during his tenure of service in The Gambia, Turkey would work with The Gambian authorities to strengthen ties in education, health, fisheries and mechanised agriculture, while also looking at investment in trade, energy and telecommunication.

Ambassador Yuceer has been a career diplomat since 1991 and has served diplomatic assignments in various countries. He arrived in The Gambia in November 2016 but the presentation of his credentials was delayed because of the political impasse in The Gambia early this year. His diplomatic tour of duty as Turkish Ambassador to The Gambia will be for two years.

Ambassador Wardle intends to build on the long-standing relationship between The Gambia and the United Kingdom. She commended President Barrow and his team for their leadership, noting that they had set an example of democracy worthy of emulation.

She said The Gambia and the United Kingdom enjoyed a long history of association, which would continue to flourish.

Speaking with reporters after her audience with the President, the Ambassador said Gambians could expect to see a boost in tourism from the UK, a sector that had always been strong, given the large number of tourists who come to The Gambia from Britain. The tourism sector is expected to create jobs for the youth.

Ambassador Wardle spoke of the UK’s continued support to The Gambia in higher education with the Chevening scholarships.  Other areas she highlighted for cooperation were justice, capacity building for the Gambian legislature and women’s empowerment through the UK Department for International Development (DFID).

Ambassador Wardle joined the Foreign and Commonwealth office in 1985, and has had diplomatic assignments in Moscow, Beirut, Riyadh and Yemen, serving in various capacities.

The third and final credentials ceremony of the day was the presentation of letters of credence by Ambassador Mailo Cassama of Guinea Bissau. The new envoy reiterated the historic ties between Guinea Bissau and The Gambia, dating all the way back to the Kaabu Empire.  He said he intended to nurture the continued ties between the two countries during his diplomatic tour of duty in Banjul.

Ambassador Cassama also spoke of the two countries’ membership in sub-regional and regional bodies. He expressed confidence in a strengthening of bilateral relations in defense and security, immigration, tourism and culture. He also said that the two countries could benefit from sharing experience in cashew farming.

Ambassador Cassama started his career as a banker in 1982, rising to become a financial administrator.  He became Adviser to the Guinea Bissau President in 2013, and a year later moved to the Ministry of Foreign Affairs, before his appointment as Ambassador.

Other senior officials were Secretary to Cabinet Isatou Auber-Faal, and Permanent Secretaries Njogu Saeer Bah and Ebrima Ceesay from the Ministry of Foreign Affairs, International Cooperation and Gambians Abroad, and the Office of the President, respectively.