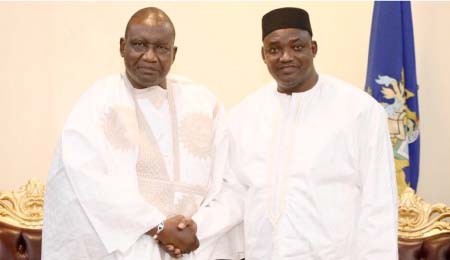 State House, Banjul, 13thOctober 2019 - His Excellency, President Adama Barrow on  Wednesday received the Letter of Credence of the new Senegalese ambassador to The Gambia,  His Excellency, Bachirou Sene at the State House in Banjul.

In line with existing diplomatic protocols, Ambassador Sene was received with military pomp  and parade, with the honour of inspecting a military Guard of Honour.

In welcoming the new ambassador to The Gambia, President Barrow congratulated the  ambassador on his appointment. He stressed the historic and unique friendly relationship  between The Gambia and Senegal, saying ‘‘ the fact that we [referring himself and Ambassador  Sene] are speaking Wolof to each other says a lot about the ties we share’’.

The President expressed optimism that the high level of peaceful co-existence between the two  countries will continue to advance the development of their respective peoples. He extended  heartfelt gratitude to his colleague brother and friend, President Macky Sall, for his great choice  of ambassadors to The Gambia, citing the outgoing Ambassador – Professor Salieu Ndaiye, as a  committed and instrumental diplomat to the Senegambian cause.

For his part, the new Ambassador said he was happy to be assigned to The Gambia, vowing that  his ultimate mission is to further strengthen and expand the bilateral ties between The Gambia and Senegal.

‘’I am sent here to foster the strong ties between The Gambia and Senegal. We are all happy  about the current state of relations between our countries. The relationship is great and beautiful. I am happy to be assigned here because I consider myself Senegambian citizen’’.